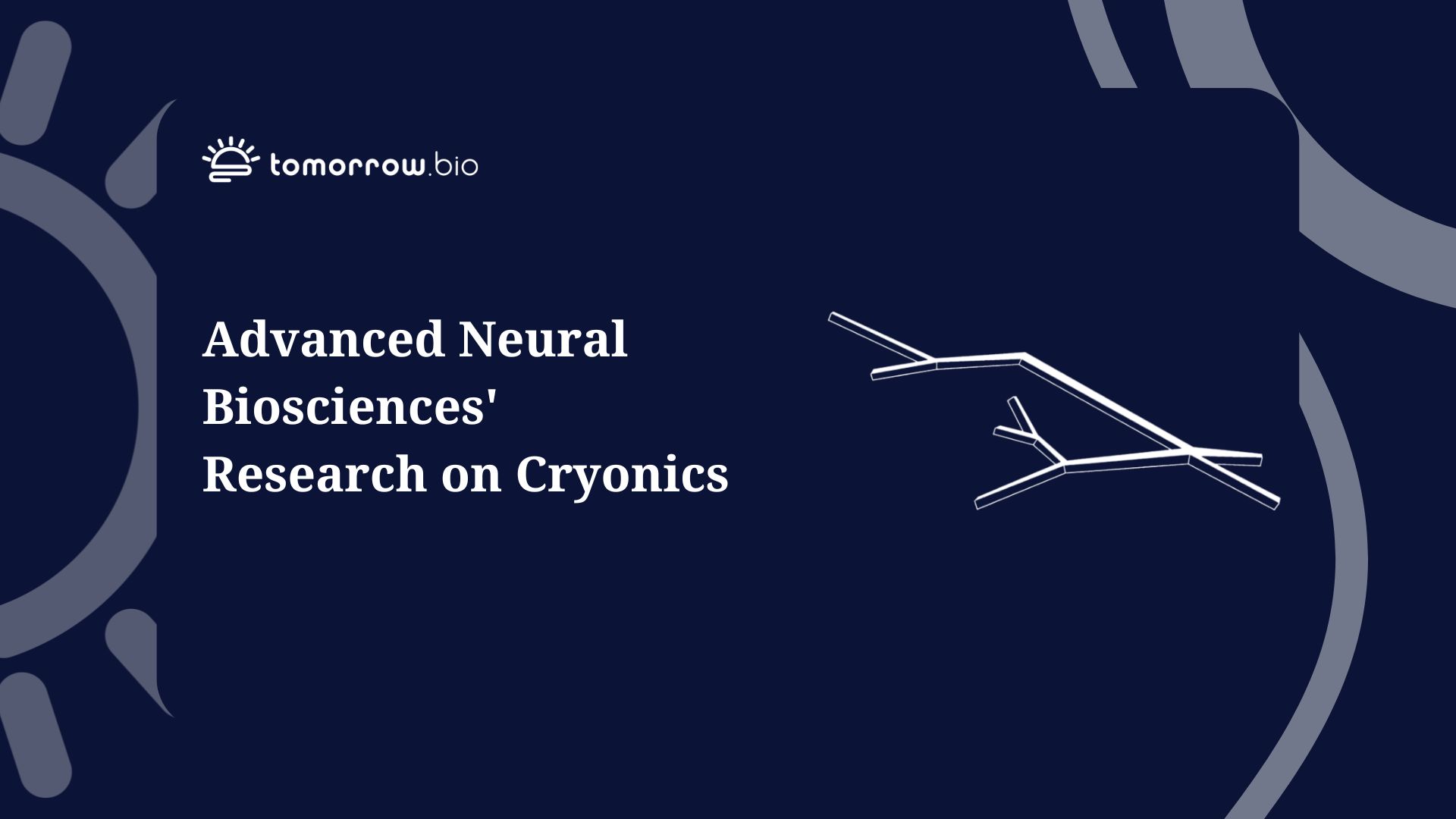 A biomedical research company advancing the field of human cryopreservation.

The cryonics community is made up of various individuals working to advance fields such as human cryopreservation biostasis and longevity research. Ahead of the Biostasis2022 Conference, we introduced one of the most eagerly awaited speakers, Aschwin de Wolf. His work at Advanced Neural Biosciences (ANB) has been instrumental in improving cryopreservation procedures. For this reason, we decided to dedicate an article to his innovative biomedical research company. Below, you will find everything you need to know about ANB and how their efforts are helping the advancement of cryonics.

Advanced Neural Biosciences was founded in late 2008 by Aschwin de Wolf and Chana Phaedra with the aim of improving the science and technology behind cryonics aka human cryopreservation.

Although they had the equipment and funds to start this mission, in its first four years ANB was a rather small company. Based in Salem, Oregon, it was mostly uncompensated part-time and weekend work. It was only towards the end of 2013 that they managed to move the labs to Portland, Oregon and were able to hire the two founders full-time, giving them the opportunity to devote themselves entirely to the mission. A few years later, ANB managed to open a second location in Brooklyn, New York.

ANB has received several grants that have helped it research technologies for the low temperature preservation of “central nervous tissue and whole brains for brain banking, pharmacological drug discovery, and the study of neurodegenerative diseases.[1]”

Some of the organizations that have funded research at ANB are the Immortalist Society, the Life Extension Foundation, the Cryonics Institute, and Alcor, with which they often collaborate on projects.

To date, ANB has continued to grow, carrying out various research projects on fundamental aspects at the heart of cryonics. From the toxicity of cryoprotectant agents to the perfusion of ischemic brains, these researchers are doing important work in human cryopreservation.

Advanced Neural Biosciences presents itself as one of the few research institutes in the world dedicated to the field of neuronal cryobiology. More specifically, this involves investigating and improving cryopreservation techniques for the central nervous system. As stated on their website:

Our aim is ice-free preservation of the mammalian brain without loss of ultrastructural detail or biological viability by developing vitrification solutions with negligible toxicity, low viscosity, and optimal blood brain barrier penetration.

If you are familiar with current cryopreservation techniques, you should know that one of the main objectives during the procedure is to minimize ice formation. The human body is made up of 60% water, which would inevitably freeze when exposed to the extremely low temperatures used in cryonics. Ice crystals have sharp edges and 9% more volume than liquid water. Their formation would cause damage to the surrounding tissues. In order to improve this aspect of the procedure, one option is to create more effective cryoprotectant agents with better penetration and less toxicity.

Ischemia is one of the worst enemies of quality cryopreservation. As stated by ANB’s two founders in an article on human cryopreservation research on the Immortalist Society website:

Until cryonics becomes available as an elective medical procedure, all cryonics patients will experience varying degrees of cerebral ischemia. Even in “good” cases where stabilization procedures are initiated promptly after pronouncement of legal death, the agonal period prior to cardiopulmonary arrest can give rise to cerebral perfusion impairment. [2]

Ischemia refers to inadequate supply of oxygenated blood caused by a blockage of the vessels supplying the area or by cessation of cardiac activity. Once the supply of oxygen stops, our cells compensate for the lack of oxygen by changing their activity from aerobic (with oxygen) to anaerobic (without oxygen). However, when this is no longer possible, the cells enter a state called “autophagy” — from the Greek for “self-eating''. Basically, they start consuming their own proteins, until they finally die.

ANB is identifying various protocols and components that can reduce cell metabolism (decreasing the cells' need for oxygen) and improve blood flow to the brain after ischemic events.

It’s hard to select just a few of the achievements of a research company that has been in business for so many years.

In case you are interested to throw yourself headlong into the more technical aspects, you might be interested in the study published by the scientific journal Rejuvenation Research in June 2020. In Ultrastructural Characterization of Prolonged Normothermic and Cold Cerebral Ischemia in the Adult Rat [3], Aschwin de Wolf and colleagues analyzed the levels of cerebral ischaemia after cardiac arrest in rats. Various data were collected by qualitative examination using electron micrographs. Different levels of cerebral ischaemia were recorded depending on both temperature and time since death (from 0 hours to 6 months).

As interest in cryonics is still limited, there are few studies that gather information on ischemia with the aim of improving brain preservation. This study could be cited as one of the main ones. But what other aspects have been studied by ANB?

Cryoprotectant agents used by cryonics organizations around the world are toxic, the toxicity of these cryoprotectants are both concentration and temperature dependent(reduced metabolism). This will be another challenge for future revival. No surprise then that several research institutes, as well as our R&D department, are working on the development of cryoprotective agents with reduced toxicity.

Currently, Tomorrow Bio and Cryonics Institute both use an in-house optimized version of VM1.

We expect that advancing research will enable us to continuously improve our solutions.

Since it is almost impossible to avoid ischemia altogether, cryonics organizations must do their best to minimize it. As stated by de Wolf:

In the case of cryonics organizations that do not offer standby and stabilization services, we should expect at least 24 hours of cold ischemia for a typical (remote) patient, often preceded by significant periods of warm ischemia due to no, or slow, cooling. [2]

At Tomorrow Bio, we offer an all-inclusive cryopreservation service. This means that we have standby teams available 24/7 that are trained and equipped for cryopreservation on site. This certainly helps reduce ischaemic damage, but there is still research to be done.

Two interventions that are presumed to mitigate perfusion impairment are antithrombotic therapy and induction of hypothermia. Administration of the anticoagulant heparin prior to ischemia and the thrombolytic streptokinase following ischemia failed to improve perfusion. This outcome corroborates that ischemia-induced “no-reflow” is not confined to blood clotting and suggests a role for the involvement of blood in a non-coagulating fashion. [2]

The growth of interest in cryonics in recent years is finally providing this field with the investment it needs to progress.

There are many scientists and researchers, such as Dr. Ramón Risco Delgado and Dr. Roman Bauer, who are working on the development of cryopreservation. We may be able to preserve organs in the future (by creating organ banks and solving the problem of transplantation). Not to mention the possibilities offered by the success of human cryopreservation. How many of those doomed today will we be able to save?

If you want to learn more about cryonics, check out our online editorial Tomorrow Insight and join us on Discord to discuss all things biostasis. If you're looking for a way to support research, and advance the field of human cryopreservation, sign up for our Tomorrow Fellow Program. Become a pioneer of this life-saving technology.