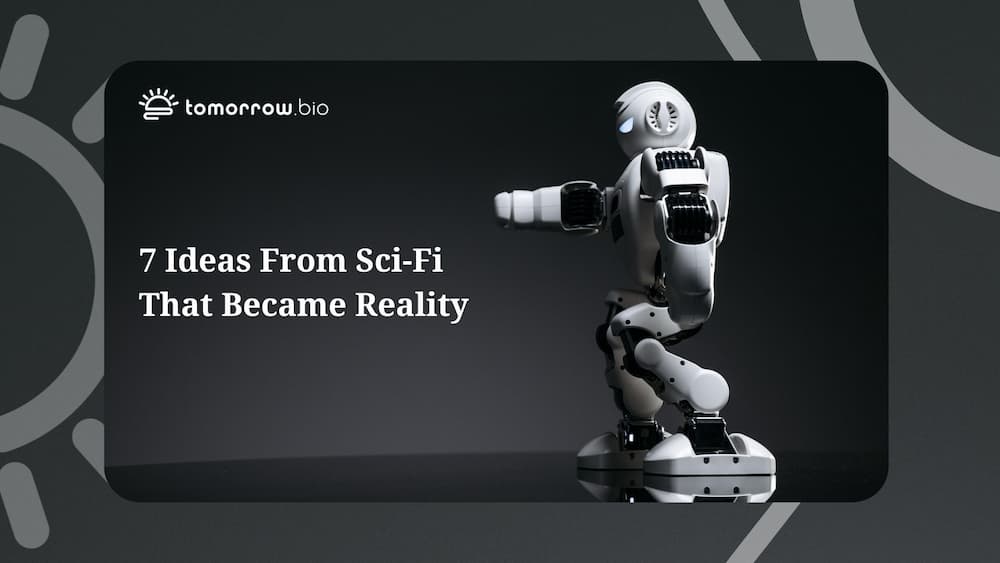 7 Ideas From Sci-Fi That Became Reality

Fact or Fiction? Find out how some technologies might not exist without sci-fi.

Tomorrow Bio doesn’t know what the future might hold—but it seems like science fiction writers of the past do.

Without the imagination of sci-fi writers, digital technologies such as mobile phones, video calls, drones, and more may not exist. Even things like credit cards, antidepressants, and the internet are thought to have been inspired by science fiction. In fact, it’s believed that many stories from the 1950s and 60s inspired Nasa scientists to become part of the space race! From dystopian films to movies that portray the exciting potential of technology (like human cryopreservation) sci-fi has considered so many possibilities. Let’s take a look at some that inspired reality.

The Jetsons was an animated TV show from the 1960s. The futuristic cartoon offered fans a glimpse into a utopian future and accurately predicted what we know today as 3D printing. The family was fed through a food-making machine, thus foretelling 3D food printing. Years later In 1987, Star Trek introduced the world to “The Replicator”, which could produce food from thin air in seconds.

The capabilities of 3D printing nowadays have superseded expectations from its first appearance on TV. While still in its infancy, scientists have developed 3D food printing to produce full and personalized meals. This technology is also being developed in other areas, like in the mechanical and medical industries. Exciting advancements in 3D bioprinters could also be life-changing for patients seeking organ transplants - adding to or perhaps replacing cryopreservation techniques.

Stanley Kubrick’s film 2001: A Space Odyssey was loaded with futuristic technology that would later become a reality. The 1968 movie featured the spaceship crew using tablet-like devices to watch the news, referred to as the “newspad”.

Interestingly, over 40 years later, the “newspad” would be presented in a courtroom in America. In 2011, Apple claimed that Samsung infringed on their iPad design with the latter’s Galaxy tablet. Samsung’s attorney’s put forward a still of Kubrick’s film featuring the “newspad” to prove that the iPad’s interface was in fact, invented 40 years prior. Unfortunately for Samsung, its argument wasn’t successful.

Star Wars: The Empire Strikes Back

It’s unlikely that you will find yourself in a scenario where you must duel your own father and lose your hand in the process. Unfortunately, this was the case for Luke Skywalker. Luckily for him though, George Lucas envisioned a bionic hand for Mr. Skywalker that would function the very same as a regular one.

Prosthetic limbs have come by leaps and bounds since 1980. Many prosthetics today are made of space-age materials to provide increased durability and function. Some high-tech prosthetics are also making use of bionic technology, which would make it possible to connect the mind to the artificial limb. Bionic devices send sensations from the device to the brain, allowing the person to feel like they're using their own limbs.

Those interested in life extension and cryonics may have also heard of the term ‘cybernetic immortality.’ The idea is that a person can extend their lifespan by taking an individual body part and replacing it with an indestructible artificial equivalent. Beyond this, ‘mind uploading’ could be possible, as the individual’s mind could be essentially copied and pasted into robust machinery to achieve a type of immortality. If you woke up in a world where you were indestructible, what would you do?

Back to the Future II

In 1989, Back to the Future II made some outlandish predictions for 2015 that didn’t materialize. Examples include self-tying trainers, flying cars, and the self-drying jacket. However, some did come to fruition, like biometric technology. In the film, antagonist Biff Tanneen pays for a taxi using their fingerprint.

Biometrics are used far and wide in the present day. The effortless touchscreen login on phones, facial recognition, and voice ID have been instrumental in airport control, law enforcement, civil identification, and more. For the individual, biometrics are useful for safely logging into financial apps on phones, accessing medical records, and making small transactions. Perhaps in the world after reanimation from human cryopreservation, biometric technology will allow for things like physical identity verification, odor recognition, hand geometry, and DNA signature reading.

Ray Bradbury’s 1953 novel Fahrenheit 451 predicted the rise of wireless earphones. The novel envisioned ‘little seashells, the thimble radios tamped tight, and an electronic ocean of sound, of music and talk and music and talk coming in, coming in on the shore of her unsleeping mind.’ Sound familiar? In 2016, the ‘little seashells’ were born in the form of Apple’s AirPods.

Arguably the first ever science fiction novel, Mary Shelley’s Frankenstein is rooted in scientific discovery. The 1818 story told the tale of Dr. Victor Frankenstein who famously revived dead flesh. The tale was inspired (in part) by experiments carried out by Italian physician Luigi Galvani. At the time, Galvani succeeded in producing muscle twitches in dead frogs through electric shocks. Many considered Shelley’s premise far-fetched, however, in 1947, Dr. Claude Beck saved a patient with a jolt to the heart using his homemade defibrillator. Many moons later, and potentially thousands of lives saved, the defibrillator is considered one of the greatest advances in medicine. Although Shelley told a very visceral tale of a defibrillator reanimating the dead, in reality, revival is not quite as unnatural as she suggests.

Long before cryonics films like Sleepers and Passengers, there was a story called The Jameson Satellite. The tale by Neil R. Jones was published in the popular sci-fi magazine, ‘Amazing Stories’. It described a hero-scientist, Professor Jameson, who is about to die, so asks his nephew to put his body in a rocket and launch it into deep-frozen outer space. The professor remains preserved for 40 million years until cyborgs discover him, warm him up, and transplant his brain into a mechanical body.

This story was read by none other than the Father of cryonics, Robert Ettinger in 1930 when he was only 12 years old. He then went on to write The Prospect of Immortality, thus pioneering the cryonics movement. While society is still a ways away from being revived by cyborgs like Professor Jameson, several cryonics organizations exist around the world, with hundreds of members, and hundreds of cryopreserved patients, too. What’s more, right now, human cryopreservation remains the best solution to extending life beyond what is currently possible.

It’s hard to believe how much the world has changed over the centuries thanks to the evolution of technology. Whether it originated from science fiction or not, the creation of groundbreaking innovations that were deemed unfathomable once have become standard today. Based on ongoing trends, who’s to know where the world might be in the next century! Hopefully, thanks to cryopreservation procedures, we will be alive to see it.

Would you like to know more about cryonics aka human cryopreservation? Say no more - Tomorrow Insight is filled with interesting articles to pique your interest. Come join us in the discussion on Discord where we talk about all things cryonics, and more.