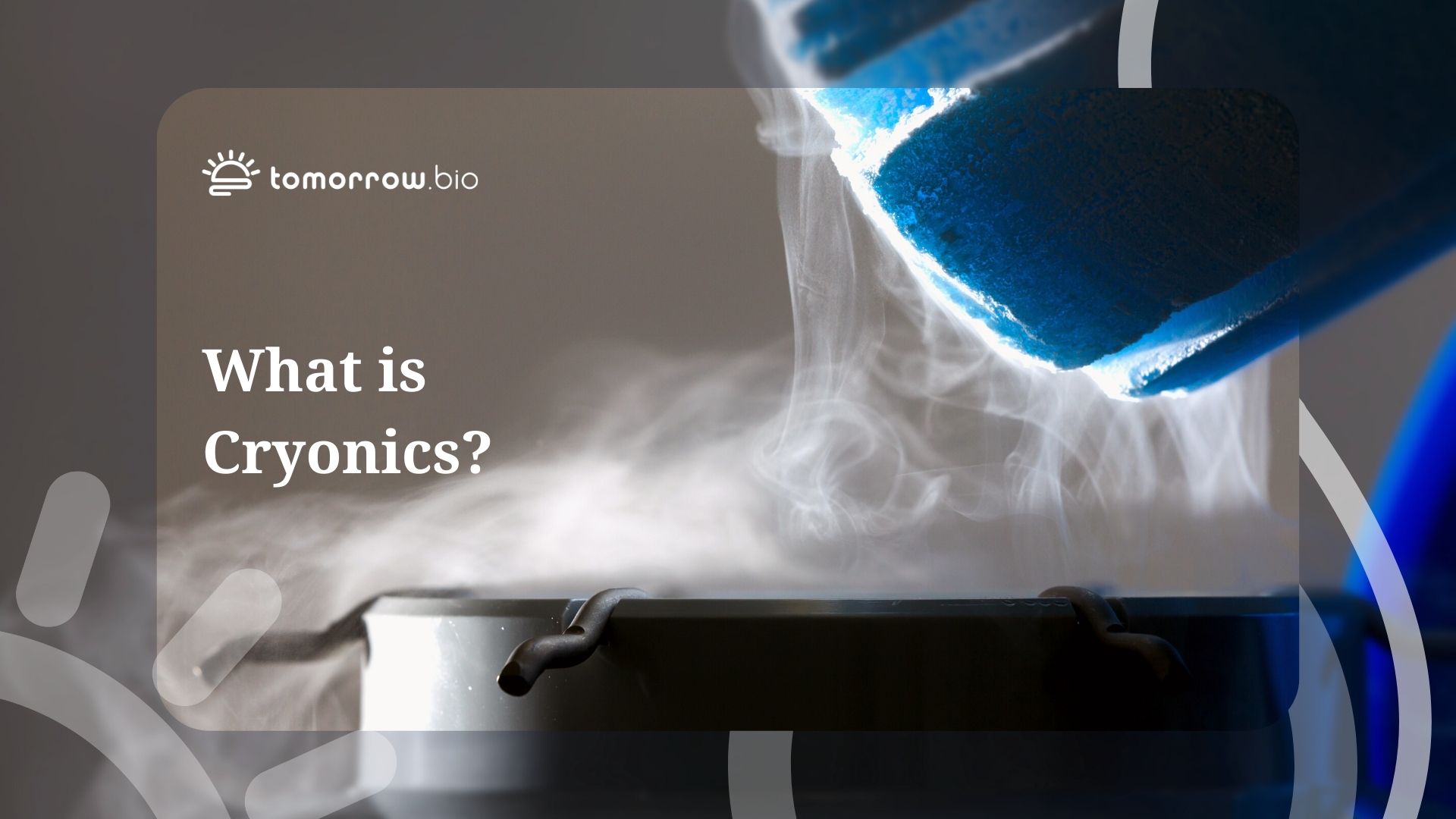 So you want to live longer, much longer. How do you go about it? You've been on diets, exercise regularly, even taken your vitamins. Maybe you've been researching the latest discoveries in longevity science and, after coming across cryonics, you're wondering what it's all about. Tomorrow Bio’s here to answer your question.

Cryonics, aka human cryopreservation, is the practice of preserving human bodies at sub-freezing temperatures (-196°C) after their legal death. The aim is to treat the causes of death and restore the patient to good health when (and if) medical technology has the capability in the (far) future.

Cryonics uses a similar, but more complex process. At even lower temperatures, cell decay stops entirely. The body enters a state of “biological pause” similarish to natural biostasis. Once in this state, people can theoretically be stored indefinitely, allowing time for technology to advance to a point where treatment of their cause of death and revival is possible.

So, even though they’re ‘dead’, cryonics patients could still still be treated. Just not today.

Once you die and your heartbeat stops pumping blood, your vital organs are starved of oxygen. Cells within your body begin to “recycle” themselves and decay as a result. To stop the process of degradation with the least amount of damage to the body and brain, it’s important to start the cryopreservation process as close to circulatory arrest (but only after legal death) as possible.

By reaching the patients quickly, lowering their temperature and performing certain steps (which we will cover shortly), our SST teams stabilize the patient with cryoprotectants and then bring them to a long-term storage facility to  preserve them indefinitely.

Minimizing the damage to the body and brain is important because it results in higher quality cryopreservation. This means that future technology won’t need to be as advanced in order to revive you. So, you could wake up sooner, rather than later. It’s important to state that the revival procedure is currently not possible, in fact parts of it are speculative. Several types of damage would need to be repairable before it might become possible and it might take many decades if not hundreds of years until it does.

Cardio-pulmonary support (CPS) is then started. CPS is similar to CPR (cardio-pulmonary resuscitation), however the key difference is that CPS isn’t trying to revive the patient. Instead, oxygenated blood is pumped through the body to slow down cell degradation. CPS is used until a heart-lung machine can be attached to the patient. This is a machine that oxygenates the blood and keeps it moving through the patient. It also plays a role in the subsequent perfusion, but we will cover that below. This all acts as a way to hold back the damage of cell decay.

During all these steps, your body temperature is gradually cooled. This is important because, like when people have fallen in frozen lakes, lower temperatures slow your metabolism and, in turn, cell decay. At lower temperatures, cells require less oxygen to survive and so cellular degradation is drastically slowed down. Initial cool-down stages can, technically, be performed by the people around a patient at the time of pronouncement, but the next steps must be carried out by specially trained teams called SST teams. Most cryonics organizations such as Tomorrow Bio deploy their own standby team to you before your death.

Once the core temperature is lowered down, perfusion can begin. During this process water within your body is replaced with a type of medical-grade antifreeze - a cryoprotective agent (CPA). The heart-lung machine attached to the patient pumps these CPAs throughout the body. CPAs protect the cells against the formation of ice when the body reaches sub-zero temperatures. Ice crystals, having sharp edges, would damage the tissues.

After you’ve been vitrified, you can be transported to a long-term storage location. Once there, your body temperature will be brought down slowly over the coming weeks until you reach -196°C (the temperature of liquid nitrogen, or around -140°C for ITS). You will then be stored in a metal container, called a cryogenic storage dewar and your temperature will be maintained indefinitely. Tomorrow Bio's members are preserved at the European Biostasis Foundation (EBF) facility in Rafz, Switzerland.

Long-term care is achieved with monitoring by staff and receiving a constant supply of liquid nitrogen. Your long-term storage is sustained by a separate foundation whose sole function is to maintain your funds securely. They make extremely low risk investments with your money as a way to match inflation and cover your ongoing costs. More information can be found here.

Since your cryopreservation can be maintained indefinitely, technology will have time to significantly advance. Who knows what will be possible in 50, 100, or 1,000 years! Once revival is possible, you'll possibly be revived.

The technology involved in revival will no doubt be expensive upon its initial conception. However, over time, as the technology is understood more, the price might come down. But you're able to remain cryopreserved indefinitely, so there is time for the cost to come down. Time is on your side!

There is increasing interest in cryonics. Not merely because of the rapid speed of scientific and technological advancements we are seeing, but also due to cryopreservation’s use within science. Preservation techniques similar to whole body cryopreservation are commonplace in medicine already. So, it’s not absurd to believe that cryonics will eventually be too. Currently, medical technology is able to cryopreserve human embryos, sperm, blood and eggs for years, when necessary. All of which can be rewarmed and used in reproduction.

Of course, human cryopreservation is not the same and many open questions need to be answered until it might become possible.

Nevertheless, we can all agree that the world is rapidly changing around us. Scientific discovery is at the forefront of technological developments. One particular field of science that could revolutionize society is nanotechnology. We are now able to envisage ways in which we will be able to repair biological structure. Nanotechnology could facilitate cell repair and regeneration. It could theoretically assist in reviving those who are cryopreserved.

There is no evidence to suggest that cryonics can’t work in principle. Just because we don’t have the technology to reanimate someone today, doesn’t mean it will never happen. Of course, human cryopreservation is only done in cases where all other treatments and medical technology can not save the patients. It’s arguably the best of bad options.

Cryonics could be a bridge to the future. It is a potentially(!) life-saving medical procedure that would transport untreatable people to the hospital of the future. Just because someone can’t be saved today, doesn’t mean they can’t ever be saved. Nobody knows what will happen in the future, but what we do know is that you can be cryopreserved today. Human cryopreservation is currently the only technology that might give you a chance to bring you to that future. What have you got to lose?

Did you find this topic mind-blowing? Perhaps it is time to take a look at our online editorial Tomorrow Insight. There you can find articles on the topic of human cryopreservation, longevity, and futurism. Finally, we have a short educational ebook on cryonics for you. Enter your email below to download it and dive deep into this innovative technology.