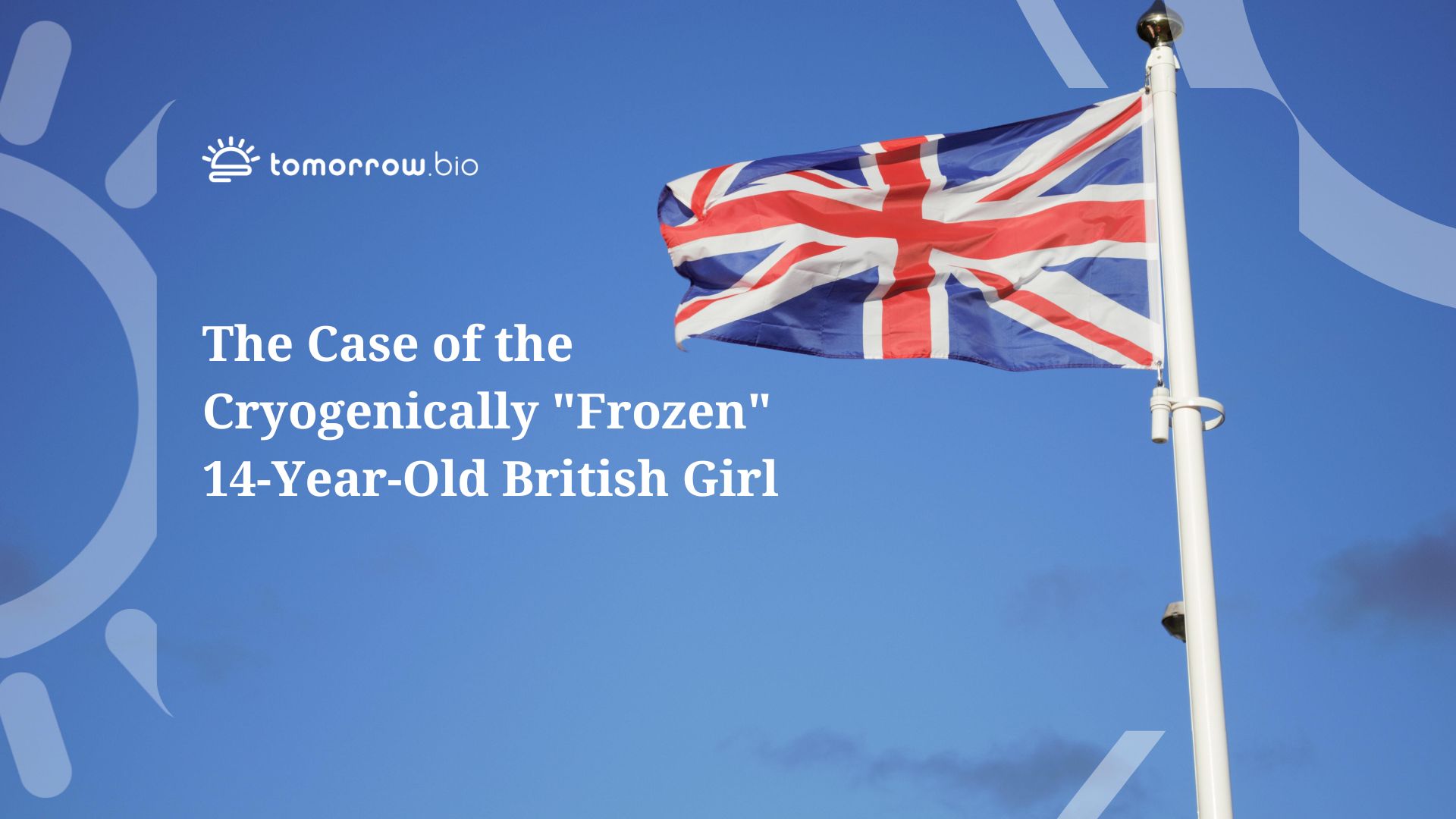 Learn about JS, the UK girl who’s dying wish was to be cryopreserved.

When someone chooses to be cryopreserved, they’re choosing the possibility of a chance at life in the future. This practice is called cryonics. During the process of cryoprotection, all the blood and water in your body is replaced with cryoprotectant agents (CPAs) to lower the core body temperature to sub-zero temperatures. The CPAs help prevent the formation of ice crystals that would otherwise damage the cellular structure and tissues. This allows a patient to undergo vitrification, placing the body in a glass-like state, which essentially “pauses” cellular degradation. This vitrified state allows patients to be stored indefinitely until future revival is possible.

As an adult, choosing to be cryopreserved is fairly easy. All you need to do is sign up with your preferred cryonics provider (i.e. Tomorrow Bio) and legally ensure your will reflects your decision. However, the legal process surrounding this decision becomes a little more complicated when the individual in question is a minor. This is exactly what happened with “JS,” the 14-year-old British girl who’s dying wish was to be cryogenically preserved.

The Story of “JS”

JS is the pseudonym of a 14-year-old British girl who passed away in October 2016. Her real name was never released for privacy reasons. She was diagnosed with a rare form of cancer that wasn’t responding to treatment. JS lived with her mother full time and had been estranged with her family since 2008.

So, what happened? Why did this story receive so much media attention?

During the last few months of JS’ life, she began researching cryonics and the process of human cryopreservation. She knew that she was going to die, but that didn’t mean she was ready for her life to end. Unfortunately, since a minor cannot legally make a will, the court holds the power to decide where the child’s best interests lie.

When JS expressed her wish to her mother, she supported her decision. When her father got word of this, he was severely against it. JS’ father believed that revival from cryonics was an impossible procedure and even if she were brought back, she may not find any other relatives, might not remember things, and could be left in a desperate situation since she’s only 14. These are some common misconceptions and false beliefs about cryonics. Cryopreservation is not a scam and it’s been shown that, with cryoprotection, the area of the brain that makes you who you are (memories, personality, etc.) remains intact.

Since JS’ parents had differing opinions, it would be up to a judge to decide her fate. JS realized this and decided to take measures into her own hands. She sent a letter to the judge explaining why she wanted to undergo cryopreservation; it was her dying wish. The judge, Mr. Justice Peter Jackson, visited JS in the hospital and commended her on the “valiant way” she faced her death [1]. He informed her that he was going to rule in her favor and her wish would be granted to be cryopreserved. She died shortly after in October 2016.

Her Decision to Be Cryopreserved

Like many people who are interested in cryopreservation, JS wanted the chance (however small) to live a full life. This is one of the most common reasons people sign up for cryonics. It’s not that they fear death, but rather, they enjoy life. They want to see what the future holds or want the chance to experience more of it, pursue new hobbies, or simply spend time with their loved ones. JS chose to be cryopreserved for this reason.

While the technology for future revival does not currently exist, it doesn’t mean that it will never be developed. In an interview with Prof. Dr. João Pedro de Magalhães, a biology expert at the University of Liverpool, he told the BBC that there was a “small” chance that it [cryopreservation] could work at some undetermined point in the future [2].

“We don’t know how technology is going to progress in a hundred years from now,” he said. “I think it’s quite remarkable we are talking from Liverpool to London and I’m looking at you and we were doing that live. If you were to tell that to someone 2[00]-300 years ago, they would say that you were mad” [2].

We don’t know what will change in the future. Although the technology for revival has yet to be developed, the cryonics community is optimistic that someday it will be a real possibility. In fact, there’s no biological reason it would fail. Until then, Tomorrow Bio is committed to doing our part in advancing research and development within the field. We offer whole-body cryopreservation for our members throughout Europe. You can learn more about cryonics by scheduling a call with one of our team members, or check out Tomorrow Insight for more information about cryonics.

So, what would you do if you were in JS’ position? If you can relate to her story and want a chance at a second life, don’t hesitate—sign up today.