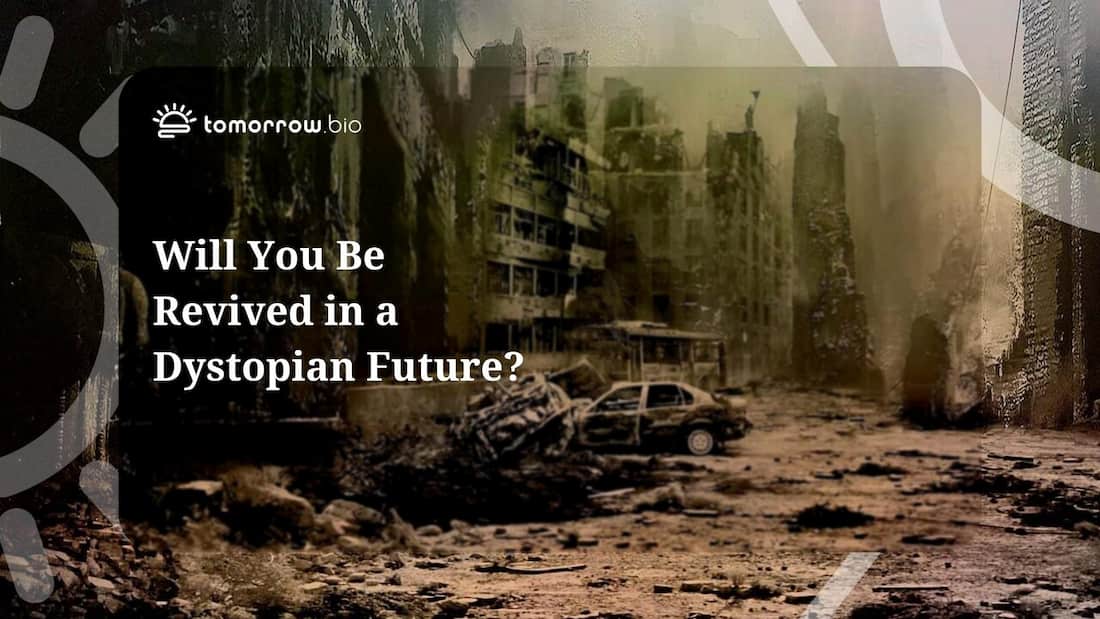 Will You Be Revived in a Dystopian Future?

What kind of world will you wake up to post-revival?

Dear reader, let me ask you a question: when you think of the future, what comes to mind? Is it a place of endless possibilities with new technologies and experiences in a utopian society? Or is it a doom-and-gloom dystopian nightmare?

There are many speculations about what the world could look like in the near and far future. One of the most common depictions is a world where society has broken down. Aspects like individuality are discouraged as depicted in 1984 and The Giver; there’s a significant lack of resources like we see in Children of Men; or at some point, a totalitarian figure emerges and makes society worse like in the Hunger Games, V for Vendetta, or Fahrenheit 451.

These don’t sound like ideal scenarios to wake up from biostasis! But would you actually be revived in a dystopian future?

Trends of the Future

We can’t predict what the world will look like decades or centuries from now, but we can speculate based on trends. Let’s take a look at some that might impact futuristic societies.

As it stands, the current global population according to the UN is t 7.98 billion people. It’s projected that this will increase by 2100 to over 10 billion. While this may be the case, the UN projects that the fast global population growth that has occurred for the last two centuries will eventually come to an end. What does this mean? Humanity will reach a point where the population ceases to grow. This is usually after a moment in demographic history when the number of children born stops increasing, the ‘peak child’ moment. This can already be seen in the decline in fertility rates over the last 70 years, with further projections of decline by 2100.

So, what could this mean for you waking up in the future? It might be the case that by the time you are revived from biostasis, the average lifespan will be longer compared to the time when you were initially cryopreserved.

When you are awakened from cryopreservation, the revival technologies will be your first interaction with new technological advancements. While cryonicists cannot predict what these types of innovations will look like, there are already discussions and speculations surrounding possible future technologies.

These trends include innovations in process automation and virtualization. Robotic Process Automation (RPA) is predicted to change the way businesses are managed in the coming decades. Software used to automate business processes could allow common, everyday tasks for companies to be carried out by machines, whereas now they are done by people. Utilizing technologies like artificial intelligence (AI) could help make this trend a potential reality.

As well as RPA and AI technologies, nanotechnology could also play a role in shaping the world of tomorrow. This science deals with the design, synthesis, characterization, and application of materials and devices on a nanometer scale. This technology could be beneficial across different industries. For example:

Another area technologies could further advance in is virtual and augmented reality. Already, companies such as Meta are capitalizing on virtual reality technologies with the Metaverse. Trends towards this technology could mean that digital spaces like this could become more immersive, with the potential to upload digital copies of objects, environments, and possibly people. This technology still has a long way to go but has made significant progress in the last decade. It is possible that it may even be critical to revival from biostasis.

In this day and age, it is impossible to talk about the future without addressing climate change. This phenomenon is already impacting the way humanity lives now, so how will this impact our lives decades or possibly centuries from now?

Current climate change is affecting almost every aspect of our environment. Sea levels are predicted to rise significantly by the end of the century. More extreme events such as storms, hurricanes, and disasters such as droughts and wildfires are predicted to increase as well.

However, while this may sound doom and gloom, that doesn’t mean humanity isn’t already working to address this challenge. This comes in the form of promoting sustainability and adapting to these environmental changes.

Changing course and becoming a fully sustainable society is becoming more of a possibility, with predictions that by 2050, humanity may be able to completely transition to renewable forms of energy. In addition, methods such as ‘cultured meat’, vertical farming, and utilizing indigenous traditional agricultural techniques could help societies achieve greater food sustainability, perhaps even sustainable superabundance.

In modern architecture, city planning is working to promote clean and simple spaces. For example, to develop greener areas, city planners are utilizing vertical gardening for urban buildings. This has the benefit of increasing air quality and reducing urban heat in cities. In addition, projects like Oceanix Busan are working to develop floating cities on bodies of water as a way to address rising sea levels.

What Are Long-Term Trends?

If we look at societal progression in the last half-century, it is clear that despite ongoing challenges, societies on the whole are improving. Issues such as extreme poverty, while still a problem, have declined substantially over the last generation. In 1990, nearly 2 billion people were living below the International Poverty Line of $2.15 per day. Now, that number has fallen to 648.1 million people. Child mortality rates have declined globally in that same time frame from 12.6 million to 5 million. In addition, advancements and greater accessibility to medicine, education, and a decent standard of living have increased the Human Development Index.

While there are still issues in the modern world that need to be addressed, objectively, societies have progressed considerably in the last three decades. It can be suggested that as we move towards the future, societies will continue to improve upon the previous generation.

All of the potentials of the future will only be available to members cryopreserved once revival technologies are developed. It is difficult to predict what such innovations will look like, however, there have been many speculations as to what technologies may play a role in this process.

The challenges scientists will need to address range from curing the cause of death in the patient, rejuvenating the body, and the rewarming and repairing process. There are currently 3 potential possibilities as to how revival could be achieved. These include:

Keep in mind that these are just theories, they are yet to be put into practice. So, how could such theories work? What tools and technologies do cryonics providers need to make revival possible? We’ve mentioned previously the role of AI and nanotechnologies. These two innovations could play potential roles in curing the cause of death in patients, repairing cellular structures and tissues, and rewarming and reviving patients from biostasis. However, this technology would require extensive research and collaboration to achieve.

Implications For Societies of Tomorrow

So, with that in mind, does this mean that you will be revived in a dystopian future?

The technology required for revival to be successful necessitates that society is working across different sectors, industries, and technologies. In a dystopian society, at least how humanity has imagined the possibilities, money, and resources would likely be used in other areas instead of being invested in the technology needed to revive cryopreserved patients. However, if this technology is developed, it would indicate that society has continued to progress despite challenges.

But what about dystopian depictions we see in the media today? Let’s take a look at a few examples, and just a warning: spoilers ahead.

But what about a scenario like nuclear armageddon or some catastrophic disaster that disrupts and reshapes societies? No one wants to wake up in a post-apocalyptic landscape. This is exactly what happens in Fallout 4 where the player does so after being in cryostasis for 200 years. However, in the game, cryonics technology already exists and has the potential to revive patients prior to armageddon.

Chances are if the revival technology hasn’t been developed before the apocalypse, it’s unlikely it would be achieved after it. If anything, an apocalypse would likely mean that it would take even longer to develop the technology necessary to revive anyone from biostasis. In a post-apocalyptic world, people would struggle to survive on a daily basis, meaning that they would likely not have the resources to revive someone from biostasis. A nightmare scenario that results in the total collapse of society means that revival from cryopreservation will be the last thing on people's minds. So if you’re in your cryogenic storage dewar by the time the bombs drop, you’ll probably be chilling for a while longer.

Simply put, you are more likely to be revived in a time and place where society has continued to advance compared to waking up in a dystopian society. If the future is truly as horrible as some people predict, the last thing people will consider is reviving cryopreserved patients from their slumber.

It is unclear what exactly the next decades and centuries hold in store for humanity. For cryonics, it is the hope that advanced technologies will be able to treat patients' cause of death and revive them from biostasis. Achieving this requires societal and technological progression as well as cohesion. So, by the time you are eventually woken up, society may look less like a Mad Max dystopian landscape, but rather potentially a more technologically advanced society compared to the one you left behind. So, dear reader, what kind of future do you think you’ll wake up to?

Let us know on our Discord server, and check out more of Tomorrow Insight where we post updates on all things cryonics, including articles about what the future may hold for humanity, including revival. Give them a read, and see you tomorrow!