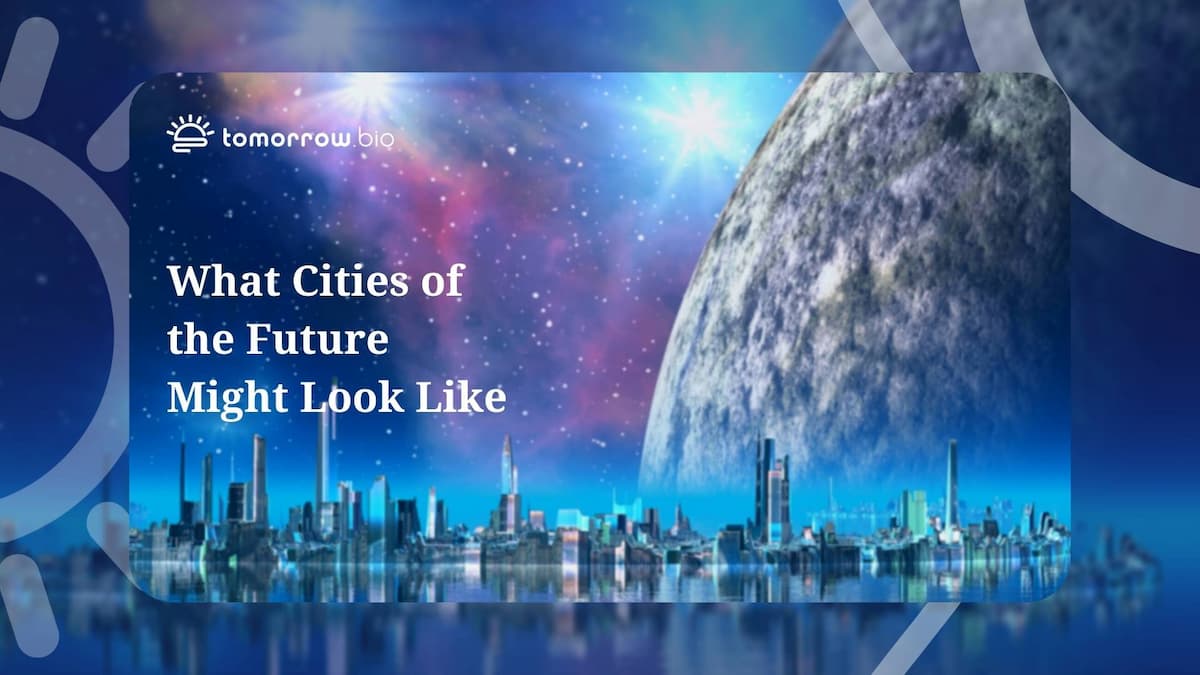 Watch out sci-fi, reality is catching up.

Have you ever wondered what cities might look like once you wake up from cryonics? To try and give an answer, we’ve recently written an article focusing on modern trends of urban planning that might shape the world of tomorrow. This second chapter will take a step further, focusing on cities that take a more futuristic approach. We’re talking ideas you’d usually only find in sci-fi that are currently being tested or conceptualised in an early stage. Afterall, as the first European biotech company specialising in human cryopreservation, Tomorrow Bio is no stranger to discussing projects that sound like science fiction at first glance. We want people who chose cryopreservation to have an idea of what the future could look like.

Over the past decades, the looming threat of climate change, progress in renewable energy and a greater focus on liveability has sparked the imagination of architects, economists and city planners around the world. Read this article to learn more about two kinds of cities you might live in after future revival from biostasis.

The first concept we are talking about today might not be a new one, but it’s certainly being given a new coat of paint. Linear Cities were first proposed by Arturo Soria y Mata in Madrid in 1882 as he was pondering issues regarding overpopulation, transport and bad sanitary conditions. The idea is simple: Build a city that runs parallel to a river and split it into economic zones along The Line, each fulfilling their individual purpose. These zones, as conceptualised by Arturo Soria y Mata are: The railway zone, the production zone, the residential zone, the park zone and the agricultural zone. The simple structure and ease of expansion should resolve some of the problems the Spanish city was facing at the time.

Ciudad Lineal, a district in Madrid, was in large part designed with this idea in mind.

Until now, the concept of linear cities has only been utilised in small areas within a bigger city, but this might change very soon.

The biggest linear city ever, “The Line”, is currently under construction in Saudi Arabia. The trillion dollar architecture acts as the centrepiece of the Saudi Arabian cognitive city project “Neom” in the region of Tabuk.

The Line, a single, massive monument, is planned to be 170km long, 200m wide and 500m high with translucent walls encasing the city in the north and the south. Just like the original idea from 1882, The Line is split into 3 areas divided by function. Once constructed, it would be split vertically, with a pedestrian area at the top and infrastructure as well as a railway underground. We may  be able to see the construction of this city in this lifetime. Who knows if in the next one, the one after revival from cryopreservation, linear cities will be the norm.

The entire structure is to be powered by 100% renewable energy. Saudi Arabia wants the city to be a major step away from their current dependency on oil, and heavily invest in renewable energy for the project. According to the project’s webpage, this is to be achieved via unrivalled wind and solar resources, and the world's largest hydrogen plant.

Designed from the ground up with efficiency in mind, everything you need to live would be reachable within a 5min walking distance, including catering, entertainment, healthcare and public transport. The transport in question, a railway at the lowest levels of the city, drives at a speed of over 500km/h and is said to get you from one end of the Line to the other in only 20 minutes.

On top of that, the entire city is built upon state-of-the-art technology and science, promising secure 5G hyperconnectivity, purpose-built data centres, AI & advanced robotics and many more technological marvels.

In the past, the concept of linear cities never reached widespread popularity and was often criticised for its inherent inefficiency while promising the opposite.

"The idiotic idea of linear cities comes up probably every decade – it needs to be reiterated that this is a terrible idea. The transport length is extremely inefficient and this can be proven with simple modelling or mathematics.” [1]

Other potential problems The Line could run into are:

The Line is a highly futuristic concept that is based on many still-in-development technologies. It’s therefore hard to measure how viable this city ultimately is. Many experts have their doubts about the implied efficiency, while others are eager to see how this city will fare in comparison to regular modern cityscapes.

One thing’s for sure: A lot of architectural and economical challenges need to be overcome to make this an efficient alternative to current cities.

The first phase of the Line is targeting completion by 2030. We are looking forward to seeing the results.

From a trillion dollar project, we move to a comparatively miniscule $200 million endeavour: Oceanix Busan.

This idea, backed by the United Nations in 2019, envisions a city that floats on water. The South Korean city of Busan took up the offer of blue-tech company Oceanix to build a first test site near their coast. Three hexagonal-shaped platforms are to spread across a 15.5 acres large ocean-surface and hold up to 12.000 residents. The areas are split into living, housing and research spaces, each connected to one another by multiple bridges.

Multiple other coastal cities have shown interest in constructing their own floating city extension, should the prototype in Busan prove successful.

Instead of trying to fend off rising sea levels with clever architecture, floating cities adapt to the looming threat by rising and sinking together with it. The isles are anchored to the sea-floor in a way that makes it impossible for them to go under, while simultaneously preventing them from being swept away.

Power generation is self-sustained through natural resources like solar, wind and waves and fresh water supplied via the latest water harvesting, filtering, recycling and distillation systems.

Travel on the artificial archipelago is as efficient as it is simple, either done by foot, bike or electric boats, aiming for a minimal carbon footprint.

On first sight, once technical difficulties are dealt with, there aren’t any major disadvantages to this concept. Probably the biggest outlier is the high cost of construction, sitting at around $200 million (~ €204 million) for just 12.000 residents. However, just like the price of cryonics, this could change with future economies of scale, meaning it should become cheaper if more people show interest. It can also be argued that the cost would have had to be invested one way or another, as rising sea-level protection is a costly affair.

Another point one could bring up, is the fact that it doesn’t really help in fighting climate change, instead only shielding us from the consequences for the moment.

The floating city is a promising concept that has gained widespread appeal in many regions of the world.

Rising sea levels presently pose a major threat to coastal cities, and floating cities certainly won’t be able to change that. However, they might provide a good alternative to building walls around every seashore on the globe.

Overall, floating cities might not be the most cost-efficient solution, but they could prove to be the most sustainable in the long run.

The concepts we looked at today might sound utopian, but this utopian vision could be exactly what we need to make a change in the long run.

Human cryopreservation might be a similarly sci-fi idea to some, that is presently being conducted by Tomorrow Bio and other cryonics companies around the world. Our goal is to give people the chance to choose how long they want to live.

Of course, reintegration into society after revival from biostasis will be no easy task. The world will likely have gone through many societal and cultural changes by the time you make your triumphant return. However fear not. If concepts like sustainable superabundance hold true, and modern cities are as efficient and liveable as they are promising, you’ll probably have a great second life ahead of you.

If you woke up in the future after possible revival from cryopreservation, would you prefer to stay in a linear city, a floating city or maybe escape the utopian ideas and spend your time in the countryside afterall?

Share your opinion with us on our Discord Server or visit our editorial Tomorrow Insight and discover even more futuristic ideas!

Thank you! Relevant content is on its way to you!
Oops! Something went wrong while submitting the form.
Tomorrow Bio is the worlds fastest growing human cryopreservation provider. Our all inclusive cryopreservation plans start at just 45€ per month. Learn more here.
TAG:
Society
Top Stories
Top Videos
Cryonics