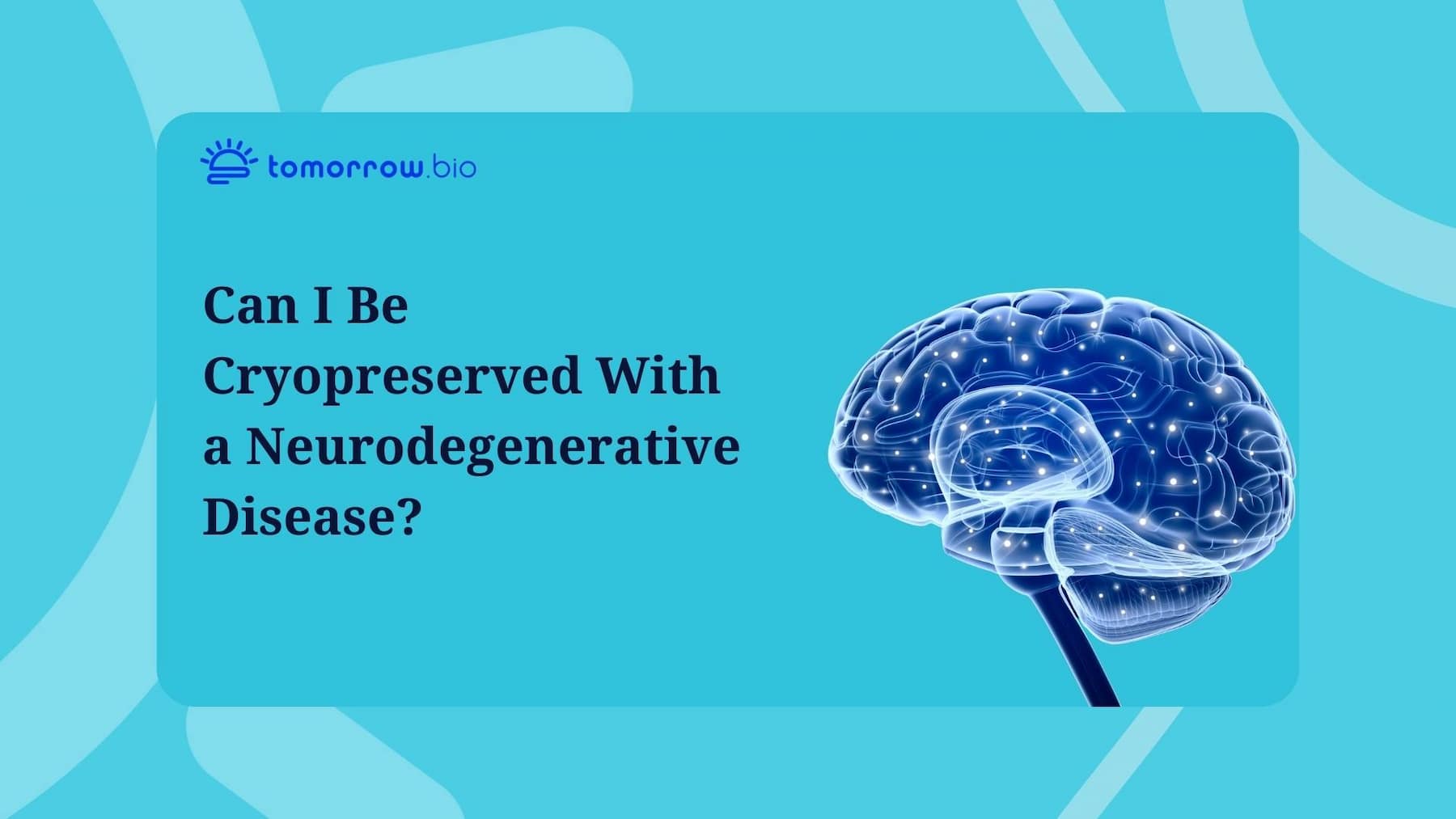 Can I Be Cryopreserved With a Neurodegenerative Disease?

Falling ill is intrusive to our everyday life and can damper our enjoyment of it tremendously. A slight fever can be enough to make you want to stay in bed. Worse conditions may even force you to stay bedridden. Luckily, modern medicine has enabled us to cure many conditions that our body isn’t able to on its own. However, not everything is curable today.

What are Neurodegenerative Diseases?

Alzheimer, one of the most common diseases of this kind, limits mental capabilities by slowly affecting functions of parts of the brain in charge of thoughts and memories. Motor Neuron Disease (MRD) on the other hand damages upper and lower motor neurons, thereby  affecting movement, speech and breathing (famous physicist Stephen Hawking suffered from this disease).

As of today, these afflictions of the brain are incurable, and a full cure will likely remain a pipe-dream for some decades to come as we have yet to fully understand these diseases. Treatment of such illnesses are mostly of symptomatic nature, such as dopaminergic treatment for Parkinson or antipsychotics for dementia.

The brain is the most important organ cryopreservation aims to preserve. According to our current medical knowledge, everything that makes you "you" is stored in the brain. Information might also be available within other parts of our nervous system, but research suggests that the loss of limbs doesn't result in loss of information. Afterall, an amputee doesn’t lose its memories. For that reason, to keep the data in your brain intact, cryopreserved patients are stored upside-down in specially built cryogenic storage dewars so the brain would be the very last thing to take damage in case of an emergency. In neurodegenerative diseases some parts of the brain have been severely damaged or lost function long before legal death occurred. Biostasis has no regenerative features, meaning it won’t heal previously harmed cell-structures.

People with late-stage mental diseases like Alzheimers can seem “not themselves” anymore and suffer from severe disorientation due to an inability to access their own brain’s information.

This fact may lead to the assumption that cryonics companies would not preserve them. But is that true?

But would it work?

We can not say what future technology is, or isn’t capable of. Therefore, we want to give people with incurable neurodegenerative diseases the same chance as everyone else. In less than optimal cases, people could die several hours before their cryoprotection procedure can begin. In such instances we would still cryopreserve the person in the best condition we are able to. We don’t want to make the call where to draw the line between “possible future revival” and “non-reversible damages' ', so we don’t. It might take technology much longer to reach the point where the state of such brains can be reversed to good health, but our storage facility offers indefinite storage time and is built to last for however long that should be.

We want people to know that the likelihood of future revival with restored brain functionality is lowered in cases of neurodegenerative diseases before preservation, but we will do our best to preserve them if they want to take that chance.

From our point of view, there are a couple of cases in which you can’t be cryopreserved, but affliction with a neurodegenerative disease is not one of them.

How neurodegenerative diseases could be cured in the future

Much like the exact revival process of cryogenically preserved humans is hard to predict, so too is a potential cure for neurodegenerative diseases. The human brain is a highly advanced “supercomputer” of sorts that scientists do not yet fully understand. More research in the field of neuroscience is necessary to get to a point where we can make sense of every brain activity as we are doing with the rest of our body.

Nanotechnology allows us to operate on a nano-scale - a feat that could help further advance brain surgery, as the trillions of synapses inside it span approximately 20-40 nanometers wide. If we manage to identify and alter faulty synaptic processes in the brain, this technology can help alleviate or even remove the problem.

Telomerase therapy research conducts trials to rebuild telomeres of dysfunctional brain cells found in Alzheimer patients, studies that could further increase our understanding of these illnesses.

A cure might still be a long way off, but research is steadily advancing. New discoveries, like the connection between Parkinson disease and sleep problems have only just been discovered recently. The more we know about these diseases, the more likely we will be able to develop better treatments, and eventually a cure in the future.

Neurodegenerative diseases are a prime example of health conditions that have no cure today, but might in the future. In most cases, death too, is a process that can be interfered with.  CPR and many surgical operations were previously thought impossible, but have been saving lifes this way for decades now. Biostasis is another way to attempt saving lives. It pauses the death process and cryogenically preserves the body for the future until medicine is advanced enough to warm you back up and treat the underlying condition of your legal death. We sincerely hope that one day neurodegenerative diseases will become a thing of the past, and be added to the list of curable illnesses. Are you interested in finding out more about how we use the science of cryonics to preserve your body? Feel free to schedule a call with us and ask us directly! We are happy to talk with you!