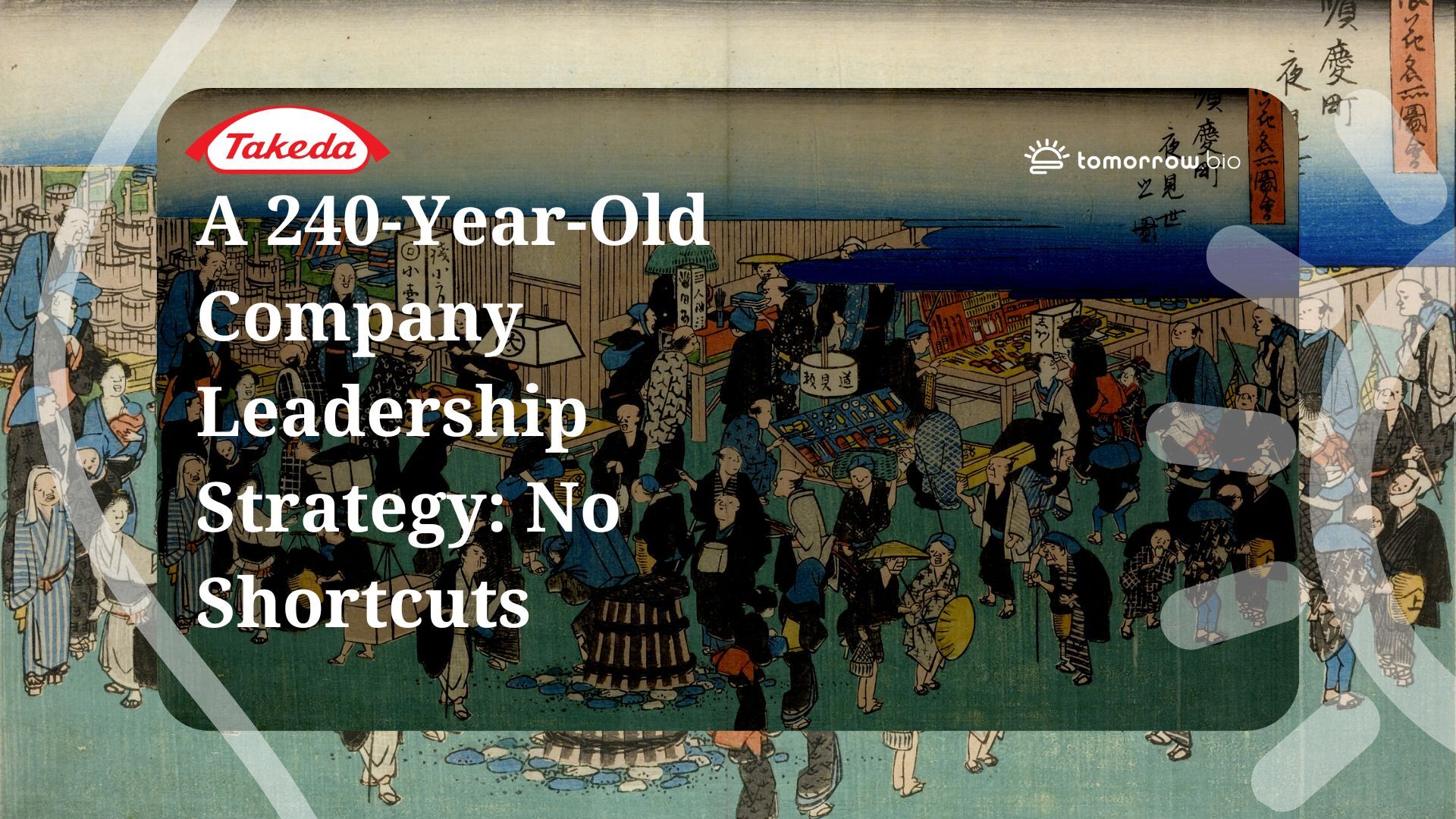 How did the 240-year-old Takeda Pharmaceutical implement a mission-driven style of leadership based on frugality with no short-term rewards?

Takeda Pharmaceutical was founded in 1781 and is one of the biggest pharmaceutical companies in Japan. The company invests heavily in R&D, focusing on four therapeutic areas: oncology, rare diseases, neuroscience, and gastroenterology (GI). They also make targeted R&D investments in plasma-derived therapies and vaccines. The overall scope of their business is:

The organization captured its values from the Takeda families. The most important one was the Confucian teaching: “walk on no bypaths.” It means accepting reality as the way it is and dealing with problems without compromising values or taking shortcuts. In this article, we will discuss how implementing a leadership philosophy based on clear values, mission, and vision, helped Takeda become an organization that lasted hundreds of years.

In 1781, 32-year-old Chobei Takeda I started a business selling traditional Japanese and Chinese medicines in Osaka—the center of the medicine trade in Japan. His small shop bought medicines from wholesalers, then divided them into smaller batches and sold them to local medicine merchants and doctors.

In 1852, Chobei Takeda III, demolished the old family mansion in Osaka and built a new home and warehouse. In 1871, ​​Chobei Takeda IV formed a cooperative union for purchasing Western medicines in Yokohama and began transactions with foreign trading companies.

In 1895, while Japan was at war with China in the First Sino-Japanese War, the company established its own factory in Osaka and became a pharmaceutical manufacturer. In parallel with the factory construction, Takeda began direct imports from England, the U.S., Germany, Spain, and other countries. Thus, the business that began as a shop selling old-fashioned Japanese and Chinese remedies quickly shifted its basic orientation toward Western medicines. In 1914, a research division was established. Around the time when imports from Germany ended due to World War I, Takeda began the sales of its own products. In 1925, the company was incorporated as Chobei Takeda & Co., Ltd., with Chobei Takeda V as president. The company went from being an individually owned business to a modern corporate organization integrating R&D, manufacturing, and marketing.

In 1933, Takeda Garden for Medicinal Plant Conservation was established. Herbs and other plants with medicinal value from around the world were collected, grown, and used at this conservation garden. The company operated during the Second World War and, although it was affected like any other business in Japan, it started to invest again after the end of the conflict. In 1946, Takeda converted the bombed-out ruins of a naval arsenal in Hikari, Yamaguchi Prefecture, into a factory. This marked the ﬁrst private use of publicly owned land after the war. It became Takeda's second main plant, following the Osaka plant, and primarily manufactured vaccines, which were acutely needed by the Japanese society at the time. In 1949, Takeda opened its stock and became a publicly traded company. In 1953, Takeda and ACC established Lederle (Japan), now Wyeth K.K. This was the ﬁrst pharmaceutical joint venture in Japan after the war. Following the establishment of a manufacturing and marketing company in Taiwan in 1962, Takeda established manufacturing and marketing companies in Southeast Asia, including the Philippines, Thailand and Indonesia. In 1978, Takeda established a pharmaceutical marketing joint venture in France, followed by operating bases in Germany and Italy.

Business Then and Now

The company started a small shop in Osaka to sell traditional Japanese and Chinese medicines. Professor Funabashi mentioned in his book that by 1805, during the time of the first family head Chobei Takeda I, the inventory asset became about fifty times larger. Chobei Takeda II expanded the family business. The sales amount grew about six times larger. Chobei Takeda III, during the end of the Shogunate Era, focused on making the business sustainable and resilient, working hard to preserve and hand over the family business at such a tumultuous time. Since then, the IV and V Chobei developed the business into a modern pharmaceutical company. The last Takeda family member to run the company was Mr. Kunio Takeda who pushed critical reforms and increased the sales and profits of the company during terrible economical times for Japan.

The group has 46K employees, 466K shareholders and in the fiscal year of 2022, the company reached annual sales of 26 billion euros.

During the research of his book, Professor Funabashi interviewed Mr. Kunio Takeda, the president of Takeda Pharmaceutical Company at the time. Currently, Mr. Takeda is the former chairman of the group and the last family member to run the company.

often quoted the motto:  “walking on no bypaths". His father also mentioned that success required good luck and an adequate degree of dullness (due the boring work) and perseverance. Since Mr. Kunio Takeda is the third son, he wasn't expecting to take over the company. But after he became president, he often got to thinking about these words and their meanings as applied to business.

When Kunio Takeda was appointed president of Takeda Pharmaceutical Company in 1993, Japan was starting to decline from the heights of the bubble economy. He realized that he had to lead the company to a greater focus, and make the right changes, without compromising on values or walking on the bypass.  The company systematically promoted self-initiated reform under his leadership. Despite all the distress that the Japanese economy was suffering, he managed to expand sales, increase profit and enhance the return on equity during these years. In summary, what he did was implement painstaking processes of selection and focus.

He faced strong backlash from both inside and outside of the company while implementing these processes. Pharmaceutical businesses spend billions of dollars on research every year while competing with other global giants. They simply don't have the luxury to elaborate business processes. As usual, some executives, employees and business partners couldn't let go of the old order and practices. Mr. Kunio Takeda believes that the leadership job is about taking some tough decisions. He said:

"You cannot be nice to everybody if you want to reform a company.  "

In a hostile corporate environment resistant to change, the motto like:  "walk on no bypaths" should have provided him the emotional support needed to take difficult decisions.

During the reforms, even though the sales and profits of the company improved very much, he wasn't happy with the sole focus on profit. He believes in a CEO leadership style that must not be blinded by private interest, but as it is stated in an old saying: "easy to say, hard to do". He added to Takeda's corporate philosophy a rule that the company should strive for the better health of their employees and linked that with the purpose of their business, which is showing progress in medicine.

Takeda’s original company rules were stipulated by Kunio's grandfather, Chobei Takeda V, the fifth head of the family, in 1940. They reflect the influence of the teachings of Prince Shotoku (Ruler of Japan from 594 to 622 CE):

Mr. Kunio Takeda used to live with his grandfather, who lived between the Meiji Restoration Era and the Showa Era, and transformed Takeda into a modern pharmaceutical company.  Mr. Kunio often listened to his grandfather

stories of hard and good times. He said:

“I was told in my family not to waste even a sheet of paper, being brought up in a merchant family in Osaka. The family was very careful in the use of money. However, in later years they boldly invested a lot of money as necessary while usually managing it well and saving when possible. Frugality has brought us a long way ”.

Mr. Takeda lived together with the fifth and sixth family heads (his grandfather and father) and regards their attitude as consistent with a lot of wisdom. Hence, Mr. Takeda inherited from his family much more than just a conglomerate to manage, but the morals and values of their times. Family as a medium of transferring a legacy is key. He also mentioned the precepts written by Chobei Takeda III, stipulating the principles of ten years of frugality. Mr. Takeda said:

"They consist of fifty-nine provisions, ensuring the highest level of caution I have ever seen. For example, the family members were obliged to refuse the services of tailors and fashionable stores, they were not to drink or go to the theaters, and so on. The family precepts were written on old wrapping paper used for mid-year gifts. I really understand what we otherwise would have called the stingiest of the stingy."

This extreme frugality enabled them to survive through the end of the Shogunate. For the Takeda clan, frugality is only prudence and patience before subsequent expansion. Meaning that, in the end, all the sacrifices paid off 10,000 fold.

Tomorrow Bio and the cryonics industry can learn a lot from Takeda. The first key learning is that their organization's main purpose is to enhance the public good and contribute to society in general. As it seems this is a pattern in Japan, the purpose of several companies focuses on the common good instead of personal interest.

The second key learning is frugality. From Takeda's point of view, frugality means having prudence (in other words, saving and keeping a good amount of free cash in the bank), especially during hardship times, but investing this capital boldly in expansion once there is a clear opportunity for high returns.

The last and probably most important key learning is Leadership with clear values. They are the channel that transmits legacies, and converts family precepts into institutional behavior, rules, and virtues, from generation to generation.

For Tomorrow Bio, making sure that the company's future management remains aligned with our long-term vision is extremely important. The lessons learned from the journey of Takeda will help us design our organization to last hundreds of years. If you found this content relevant, please rate my article using the blue bar on the right!