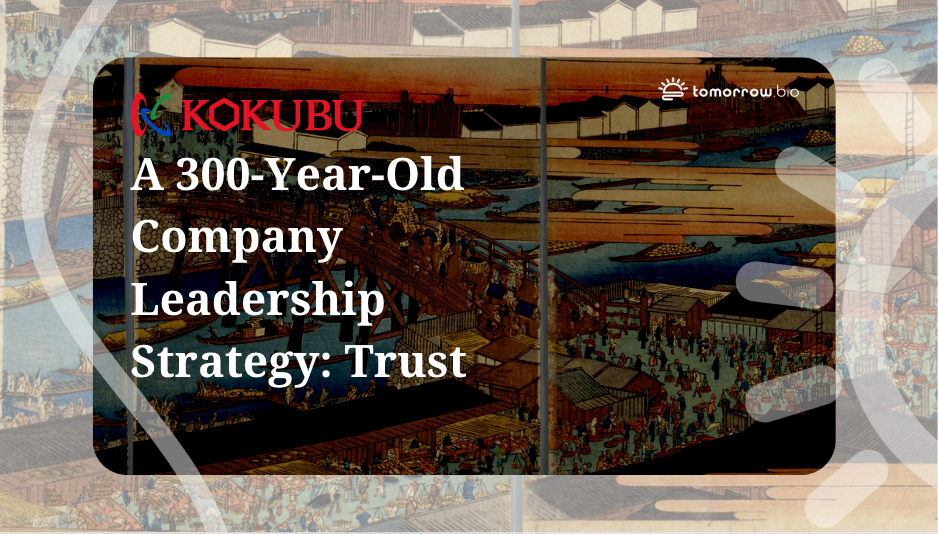 How did the 300-year-old Kokubu Group Corporation implement a mission-driven style of leadership based on a code of conduct and trust?

KOKUBU Group is a leading food and liquor wholesaler in Japan. Since its founding in 1712, the company has worked together with other organizations to provide food distribution all over the country.

The Kokubu family heads have maintained the spirit of “Trust Comes First” generation after generation. To deeply incorporate this spirit, they have established family precepts and rules, which were reinforced constantly over centuries, without altering the core values and the spirit itself. In this article, we will discuss how implementing a leadership philosophy based on clear values, mission, and vision, helped Kokubu become an organization that lasted hundreds of years.

In 1712, Kanbei Kokubu IV opened a retail store in Edo Nihombashi and launched a soy sauce brewing operation to supplement involvement in the kimono fabrics trade. In 1756, Kanbei Kokubu V moved the store to a different location and the soy sauce products brewed at their factory were labeled with the logo "Kikkodai".

In 1859,  Kanbei Kokubu VIII started tea trading. This was only six years after the U.S. Navy arrived with a squadron at Uraga Bay, which forced Japan to open its borders to the world. In 1880, the company shut down the soy sauce brewery and started its wholesaling business in a wide variety of foodstuffs.

In 1923, the store was destroyed in an earthquake, but reconstruction work started immediately and efforts were made to supply soy sauce as a daily necessity in early 20th century Japan. In 1928, the company started to expand throughout Japan, opening branches in different cities. In 1931, they finished the construction of their first building, which became the group headquarters. During World War II, the company stopped all expansion activities.

In the decades that followed the war, the company invested heavily in new products, system modernization, and expansion, opening branches in more cities throughout Japan. In 1971, the company published its first long-term management plan. In 1975, it completed the construction of its second building and current headquarters.

In the year 2000, the annual sales figures of Kokubo & Co. Ltd surpassed 10 billion dollars. During the 2000s, the company continued to increase capital and invest in new business units. In the year 2012, the company marked its 300th anniversary. During the 2010s, the company continued to invest in China and increased its overall distribution capacity. In 2016, the headquarters company was officially renamed to Kokubu Group Corporation and their 10th long-term management plan commenced.

Business Then and Now

The records state that Kokubu was founded in the early 18th century, starting as a soy sauce brewer. In 1712, the 4th Kanbei of the Kokubu family built a soy sauce

factory in what is now Ibaraki Prefecture. The same man also opened a store in Edo (current Tokyo). At that time, soy sauce manufacturing was flourishing throughout the Kanto Region.

The history of Japan is composed of several different ages and wars that shaped the country's political center. One of those ages is the end of the Shogunate period, where the Shogun (a type of warlord) was the "in-facto" ruler of Japan, while the emperor was a more institutional figure. After the U.S. Navy (with steam-powered battleships) invaded Uraga Bay in 1853, the Japanese society, especially the emperor, were in total shock. Emperor Meiji realized how outdated and extremely vulnerable they were compared to other nations. He comprehended that Americans in the U.S. could wipe out the entire Japanese capital in a couple of hours, using the artillery of their ships. Therefore, the Emperor decided to start structural reforms to open Japan to the world and end the shogunate of the Tokugawas (clan that ruled Japan for almost 300 years). The commotion during the closing years of the shogunate and the Meiji Restoration pressed many companies to make hard choices.

The bigger the organizations and the deeper their relations with political powers, the harder the choice became. In the case of Kokubu soy sauce brewer, although the company didn't have political affiliations, the choice faced by the family head, Kanbei Kokubu VIII, and his staff must have been an extremely difficult one.

Still, changes always bring opportunities. The decision by Kokubu to shut down its soy sauce factory and focus on the wholesale of food goods gave them the opportunity for expansion. Considering the move Kokubu made, the organization became a pioneer in the market for food goods wholesale.

Nowadays, Kokubu still primarily sells food goods and is Japan’s leading company in the area of liquor and food goods wholesale. Through the hectic times, what made the group successfully hold different businesses together was the family reputation. Built up through generations, the family reputation led to changes in the way they do business.

The group currently consists of 49 companies and subsidiaries, with a global presence in 60 countries. Their business units are composed of 313 locations, a product line-up of 600K items, 10K suppliers, and more than 35K corporate customers. The Annual Sales of KOKUBU Group in 2021 reached 1.881 trillion yens (Around 13.7 billion euros).

The most interesting aspect of the Kokubu Group is that, even though they have hundreds of years in the trade of food goods wholesale, they are open to change. In his book, Professor Funabashi interviewed Mr. Kanbei Kokubu XII (current head of Kokubu Group). Mr. Kokubu goes so far as to assert that his firm is willing to advance into manufacturing, services, or financial industry if commerce is not the answer. Tradition is met with adaptability.

During the interview with Prof. Funabashi, Kanbei Kokubu XII (also known as the 12th Kanbei) says:

“At the end of the day, trust counts when it comes to being a company that is able to survive major changes. It is impossible in our business to buy or sell goods without trust. Never fail to keep a promise, and be straight about paying what you owe. That’s the bottom line. Things change so we must adapt. In our company, we do not have a policy of hanging on to our current main job and protecting the family business.”

For the Kokubu family, trust is the most important character trait, both personally and business-wise. On this topic, Kanbei Kokubu X (head of the company from two generations ago) had very strong remarks. The period of Kanbei X (1883-1975) was a very difficult one, with events like the Great Earthquake (early 20th century), the defeat of Japan in World War II (1945), and the following disorder and so on. He says:

"I have no special secrets for staying healthy. I eat in moderation no matter how delicious the food may be and never take more than a small cup of sake at a sitting. And I continuously keep an eye on subtle hints for commercial opportunities. Fortunately, here at Kokubu, thanks to the cooperation of all store staff, the rightful motto, “The spirit of Kokubu is trust itself ” has never been lost before or after the war. This is a joy and I am grateful for it.”

This spirit of “trust comes first” has become a principle of Kokubu as a corporate entity. In the book of Prof. Funabashi, the 12th Kanbei Kokubu concluded with his addition to the code of conduct of Kokubu, where management must be the first to be disciplined. He adds:

“What I keep in mind as a president is to think about how to make the employees come up with creative ideas or how to motivate them to do so because it is they who do the work. I only give general directions and avoid too much detailing. However, three rules are engraved on my heart: never fail to reward good conduct; be fair to everybody; and all of us, myself included, must follow the set rules”.

The term that Kanbei X used to support this character trait throughout generations, "the rightful motto", makes absolute sense. He faced several difficulties at a time when Japan was one of the lowest-ranked countries in the world. Still, he kept the spirit of trust. In a young organization like Tomorrow Bio (or any other inside the cryonics industry), where time and long-term sustainability are unknown variables, keeping the spirit of trust has to be at the core of everything we do.

What lessons about how to sustain organizations for such a long time can  Tomorrow Bio and the cryonics industry learn from Kokubu's journey? The company faced many challenges, but kept moving forward in the right course. They've shown an incredible capacity to self-change, sometimes with extreme reforms. Adaptability is clearly not the opposite of tradition.

The most important lesson here is the construction of TRUST. The whole Cryonics industry must be trustworthy in every aspect of the trade. Without trust, there is no cryopreservation, no research, and no future reanimation. Trust is the foundation of everything this industry aims to achieve.