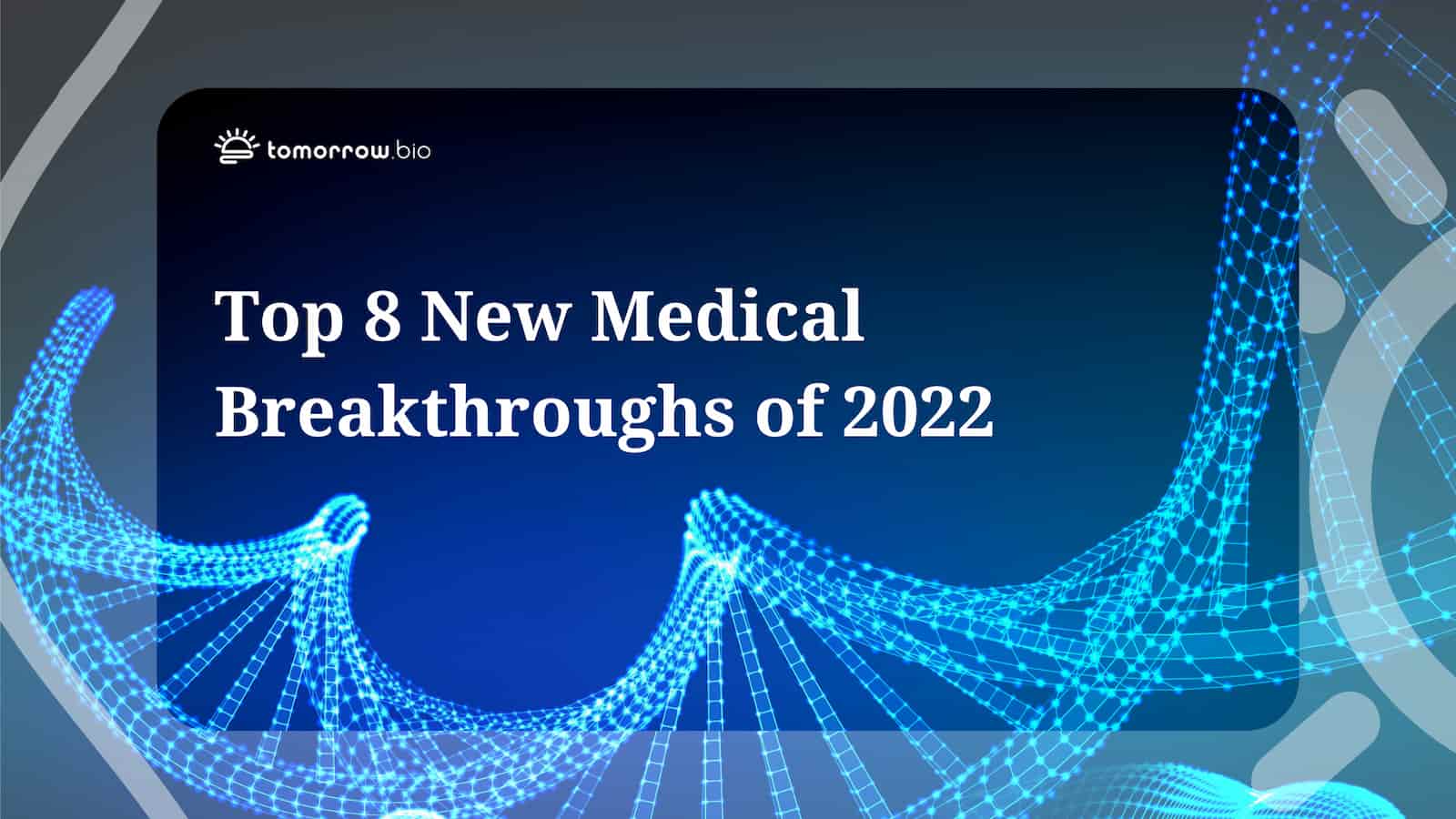 Discover 8 new treatments and technologies that have the medical world in awe.

100 years ago, there was no CPR, no chemotherapy and life expectancy in Europe was about half of what it is now, with an average of 40.6 years old. Medical breakthroughs that currently save thousands of lives were all made within the last century. Understandably so, the prospect of living far into the future through cryonics, aka. biostasis, seemed much further away in the 1900s than it does today. In medicine, one discovery inspires the next, one field inspires another, and we at Tomorrow Bio hope to contribute to this cycle with our own research. As medical technology is developing incredibly fast, we don’t have to look back an entire century to find fascinating new discoveries. Let’s take a look at eight of the newest medical breakthroughs of 2022.

An excess amount of LDL cholesterol (bad cholesterol) can cause plaque to build up on the interior walls of blood vessels, causing them to narrow. This can be very dangerous, as it blocks blood-flow to and from the heart into vital organs. Inclisiran is a newly developed drug that helps fight high LDL cholesterol.

In clinical tests Inclisiran, in conjunction with statins, has shown to lower LDL cholesterol in the body by more than 50%. [1] The new treatment achieves this by blocking the actions of the so-called PCSK9 protein, which prevents the recycling of LDL receptors in our body. Inclisiran is administered by injection under the skin once at the start of your treatment, again three months later, and then once every six months from there on out. This makes it not only more effective than any previous method, but also way less of a hassle to deal with.

Tirzepatide is a drug that promises to combat one of the most common chronic illnesses in the world: type 2 diabetes. This condition develops over time and is most commonly diagnosed in elderly patients. The hormone insulin, produced by the pancreas, allows blood sugar to be processed by our cells. In people with insulin resistance, the blood sugar can not be efficiently taken in, which prompts the pancreas to produce more insulin. This can be caused by many different outside factors in the form of repeated unhealthy behaviors. Eventually, the amount of insulin needed for glucose regulation can not be produced anymore, leading to the development of  type 2 diabetes.

Childbirth is a long-winded and stressful time for any woman. In approximately 1 out of 8 cases, the immense psychological strain doesn’t end at the time of birth, but continues into something called postpartum depression. This form of depression is usually treated with hormone-therapy, but this method can bring a lot of other complications with it.

Researchers at Reddy have now compiled a new treatment based on neurosteroids. Instead of disrupting the entire body balance via hormones, this approach only influences the regions of your brain that are directly in charge of your well-being. Scientists at the Reddy Research Group achieved this via an intravenous infusion treatment with allopregnanolone, a natural type of neurosteroid. It is administered for 60 hours straight, showing very quick effects afterwards, compared to the week-long waiting periods of other methods in this field. While some side-effects like sedation or sleepiness have been recorded after administration, they were not long-lasting, usually disappearing completely after a few days.

Mavacamten has made headlines earlier this year, being the first medication to show positive results in treating hypertrophic cardiomyopathy (HCM). HCM is a heart-disease in which the heart muscle thickens. This puts extra stress on the heart, potentially leading to cardiac arrest down the line. With a mortality rate below ~1% per year, this is not a huge problem in most cases, but in cases where it is, invasive, potentially dangerous, measures have to be taken.

Mavacamten changes this. The new medication reduces abnormal contractions caused by genetic variants, targeting the underlying condition directly. Previously, doctors had to treat individual symptoms caused by HCM one by one, oftentimes using a multitude of medications like beta blockers, antiarrhythmic drugs, calcium channel blockers and others. With Mavacamten there is no need for this cocktail of ingredients anymore.

Paralysis is one of the most restrictive conditions a human can suffer from. Losing the ability to walk, write, or even talk not only impacts your physical, but also your mental state in ways many of us can’t even imagine.

Luckily, science is making huge progress in paralysis-treatment. Recently implanted electrodes were able to collect movement signals from the brain and decode them into movement commands. These electric impulses act as a missing link between brain and body and effectively restore physical capabilities. In February 2022, implants were placed into the spinal cords of three paralysed men, all of which had their ability to walk restored just days later. If further development goes well, it has the potential to become so effective that once paralysed people will be able to return to a completely normal life again.

In medicine, data is very important, but we aren’t always good at understanding and utilizing the data we collect. In theory, the more data you have, the easier it is to find the correct treatment and cure the underlying condition of your patient. Nevertheless, some common diseases, like cancer, are too unique to the patient to be cured with the help of a general sample size. No cancer is the same as the next, which makes it so hard to deal with.

Personalized medicine refers to treatment of illnesses, not through knowledge from big sample sizes, but through exact analysis of the patient's very own data. Recent development of genomics, AI and digital twins allows for specific medication and dosages based on your own very data, like genetics. This approach showcases a paradigm shift in modern medicine, where through advanced technology, more specialized treatments can be applied.

Organ failure is a big challenge to overcome. Treatment drugs usually only prolong, not stop, the failure. The best alternative option medicine has come up with are organ transplants, which are faced with an abundance of problems surrounding the procedure. Organ transplantation is usually done by first putting a donor's organ into static cold storage (SCS) to slow down its metabolism. In case the organ stays in SCS for too long, hypoxia (lack of oxygen) can cause heavy damage to the tissue. Additionally, for each person that needs an organ, it requires another person that doesn’t. Because not every organ is compatible with every patient, this leads to a lot of shortages and long waiting lists. To make matters even more complicated, organs need to be transplanted quickly, otherwise they will lose their functions.

3D-printing, specifically bioprinting, tries to step in here, and recreate these organs from the ground up. In some cases, like bladders, this has been done successfully in the past. More complicated organs have proven to be a bigger challenge yet to be conquered. You want to know about bioprinting in more detail?

Check out the article in the link above for more information.

Clustered regularly interspaced short palindromic repeats, or for short “CRISPR” is widely considered to be one of the biggest scientific and medical advancements of the decade. This genome editing technology cuts DNA sequences at specific genetic locations to alter it by either deleting an old, or inserting a new sequence. The use-cases of this technology are near-limitless, as they can change anything from a single base pair of DNA to big pieces of chromosomes. Because DNA is at the base of many defects and diseases CRISPR could be an easy way to get rid of complex issues. Cancer is one of these diseases that stem from a change in DNA, and researchers now hope to find a new approach to fighting this threat by altering these fraudulent DNA sequences. Other potential candidates for CRISPR treatment include blood disorders, blindness, diabetes, HIV and many more. “If trial data continue to be so positive, the treatment could be approved as soon as 2023. “Bottom line, the progress of CRISPR/Vertex is a landmark in that it's likely to generate the first approved CRISPR-based medicine,” says Fyodor Urnov, Ph., CRISPR Researcher at UC Berkeley.” [2]

Every new medical discovery brings us one step closer to the long and healthy life we wish to live. In terms of biostasis, these advancements demonstrate the vast potential of future technological and medical discoveries, including that of revival after cryopreservation. Treatments get more effective against diseases and less disruptive to our body. Previously incurable conditions like paralysis or genetic illnesses are on the brink of becoming curable. We can’t tell for sure if and when Biostasis will grant you a second life in the future. What we can guarantee is that millions of smart people are hard at work on making this future one worth living in. We at Tomorrow Bio believe in humanities prowess and are very much looking forward to the future ahead of us.

If you want to know more about our endeavors towards a better future, schedule a call with us. We are happy to talk to you directly. If you believe in medicine and science as much as we do and want a chance at seeing the future for yourself you can sign-up for cryopreservation here.