Get to know Aschwin de Wolf, one of the world’s leading cryonics researchers and writers. 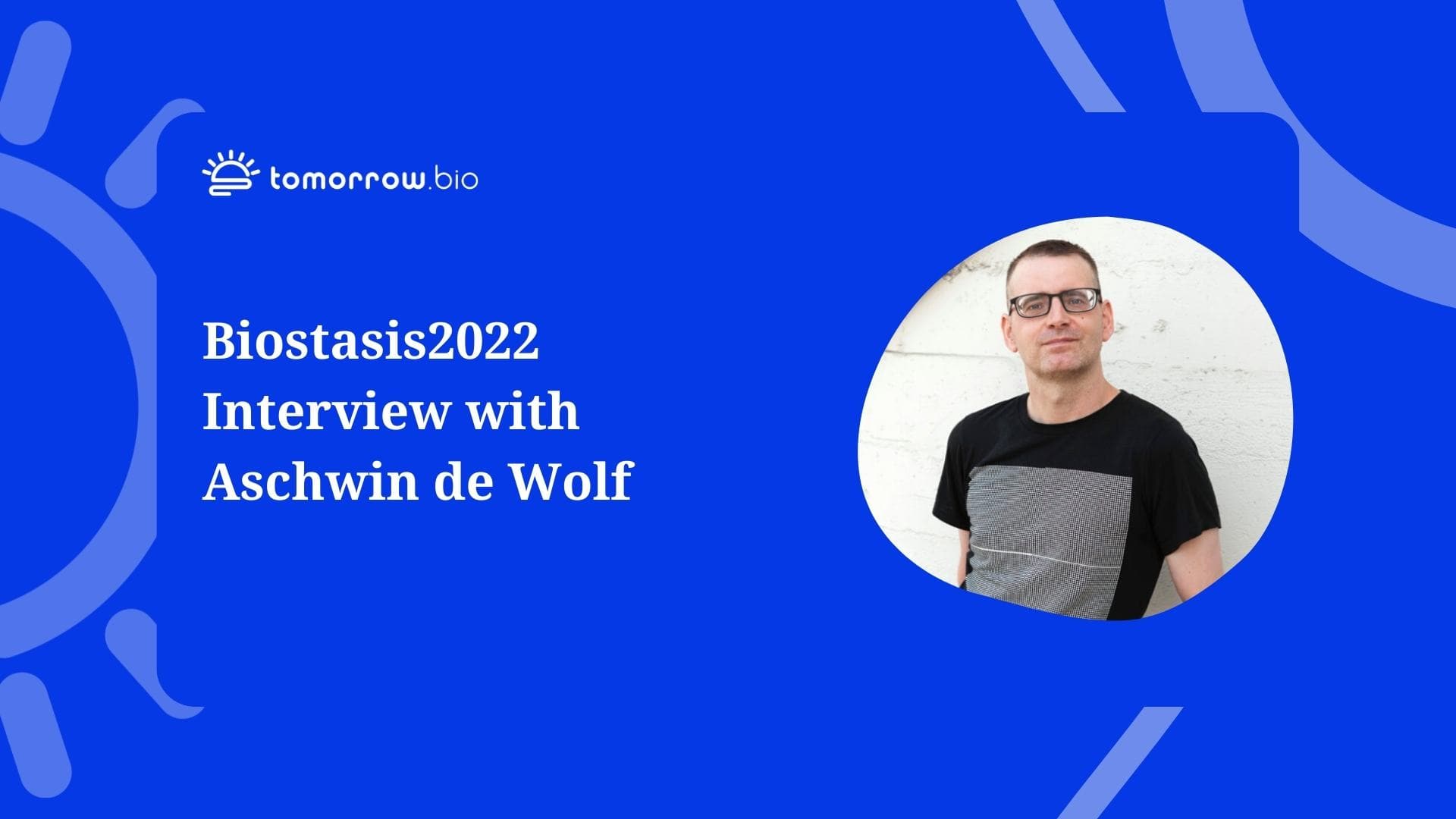 As the Biostasis2022 conference gets closer (October 21 - 23, 2022), we wanted to do a short series on some of the speakers you can expect to hear from. One of our notable speakers is Aschwin de Wolf. Aschwin de Wolf is the owner and Chief Executive Officer at the neural cryobiology company, Advanced Neural Biosciences, Inc. (ANB). He’s been an integral part of the biostasis field since the early 2000s and is now seen as a prominent cryonics leader amongst the community. Aschwin maintains a strong partnership with Tomorrow Bio as we continue our research and development within the cryonics industry.

Getting to Know Aschwin de Wolf

Aschwin de Wolf discovered his interest in cryonics at an early age, after experiencing a potentially life-changing, medical scare. Subsequently, he came across the topic of cryonics and his growing curiosity and interest quickly flourished. He signed up as a member with Alcor in November, 2002 during its Fifth Annual Conference on Extreme Life Extension. From then on Aschwin began to study cryobiology and biomedical sciences, which led him to a career with Charles Platt at the Florida-based cryopreservation research company, Suspended Animation (SA). Eventually he relocated to Portland, Oregon, despite the lack of cryonics infrastructure there.

He originally co-founded Advanced Neural Biosciences, Inc. in Portland, Oregon (2008), and a second office was recently opened (2019) in one of the original hot spots of cryonics: New York City. ANB is a biomedical research company with an aim to “perfect low temperature technologies to preserve central nervous tissue and whole brains for brain banking, pharmacological drug discovery, and the study of neurodegenerative diseases.” They also focus on “the development of novel compounds to restore optimal blood flow to the brain after stroke and cardiac arrest.”

In addition to leading ANB, Aschwin founded the online platform Biostasis.com and is a regular contributor. He also co-founded the nonprofit institute Institute for Evidence-Based Cryonics and is now CEO and President of Biostasis Technologies.  Aschwin’s passion and commitment to the cryonics field can be seen by his integration into the industry. In addition to being a founder of several well-known cryonics organizations and institutions, he acts as the editor of the quarterly Cryonics magazine that’s published by the Alcor Life Extension Foundation and regularly serves as a cryonics consultant and advisor for domestic and global initiatives. Aschwin is a co-author of the first comprehensive human cryopreservation procedures manual, author of the first medical biostasis protocol, and co-editor of a collection of the best Alcor Life Extension Foundation writings.

The list of Aschwin’s contributions to the cryonics industry could go on and on, and we’re pretty excited to hear what he has to say in his upcoming talk at the Biostasis2022 conference. Aschwin’s insatiable curiosity is one of his motivations for his commitment to cryonics, but it also applies to his life in general.

Outside of the world of biostasis, Aschwin maintains several hobbies that bring fulfillment and joy to his life. He uses his charismatic tone of voice to maintain a blog focused on natural wine, historic beers, and plenty of great insider tips. When he’s not in the middle of a unique personal challenge (like hitting 100,000 steps in a day on his Fitbit), you can find Aschwin enjoying stretches of solitude accompanied by Japanese avant-garde music. If you’re interested in reading more about Aschwin’s background, upbringing, and how he maintains an exceptional work-life balance, you can do so here.

At the Biostasis2021 conference, Aschwin spoke about improving cryonics case outcomes. He is a returning speaker, who has presented at both Biostasis2021 and the original Biostasis2020 conference. During Aschwin’s 2021 talk, he mentions a few different possibilities for case outcomes, how things are changing to better support favorable outcomes, and the progress that’s been achieved over the past few years. You can listen to his complete talk below.

What aspect of Biostasis made you say “I want to work in this field?”

The field of human cryopreservation is so small that a small number of highly motivated individuals can make a strong positive impact.

In all your years of researching Cryonics, what is the achievement you're most proud of?

I co-authored the most comprehensive technical cryonics manual published in the field. I have been glad to see that the manual is used by various cryonics organizations to educate staff about the science and protocols of human cryopreservation.

If you could get the perfect solution to one of the current challenges connected to cryopreservation at the press of a button - which would you choose and why?

The most important challenge is ice-free cryopreservation of a patient after long ischemic delays. We have done a lot of work on this in our lab, but this remains a formidable challenge.

What is the most interesting project you are working on right now?

What are you looking forward to the most regarding the Biostasis2022 conference?

What makes you feel confident in Tomorrow Bio's work?

Emil is a highly motivated and competent leader who seems eager to learn from the history of our field.

Aschwin de Wolf is a prominent cryonics leader and we’re excited to listen to what he has to say at our upcoming Biostasis2022 conference. If you have any questions about tickets or details surrounding the event, make sure you check out the Biostasis2022 website here. We hope to see you there! In the meantime, feel free to start networking early by logging on to our Discord channel.

Thank you! Relevant content is on its way to you!
Oops! Something went wrong while submitting the form.
Tomorrow Bio is the worlds fastest growing human cryopreservation provider. Our all inclusive cryopreservation plans start at just 45€ per month. Learn more here.
TAG:
Biostasis 2022
Top Stories
Top Videos