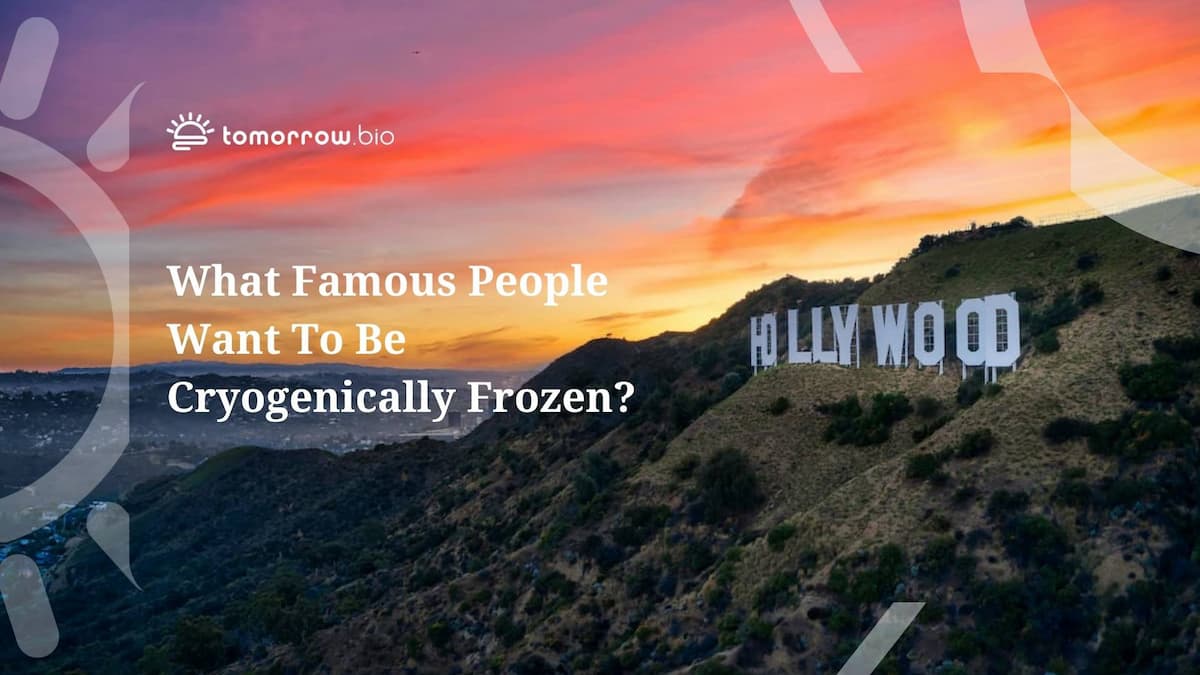 What Famous People Want To Be Cryogenically Frozen?

Find out which celebrities have decided that cryonics is worth it!

Cryonics has increased in popularity since the 1970s. So much so that celebrities are considering, or even stating that they want to be cryopreserved. Some are even rumoured to have already undergone human cryopreservation. Let’s find out who wants to be cryopreserved, and maybe dispel some of the rumours.

How Does Human Cryopreservation Work?

Before we look at which celebrities are choosing cryopreservation, here is a brief introduction on how the procedure works. First of all, a cryonics member has to be declared legally dead by a medical professional. The standby team (SST), consisting of trained medical professionals, works to cool down the core temperature through a combination of external (ice bath) and internal cooling. To achieve this, cryoprotectant agents (CPAs) are perfused throughout the body in order to bring the body temperature down while avoiding ice crystal formation. This stops the metabolic process, which in turn halts cellular decay.

Once the patient’s body has been perfused with the highest concentration of cryoprotectants, they will then be transported to the long-term storage facility. There,  they will be stored indefinitely until medical technology has advanced enough that revival is possible. The purpose of this medical procedure is to give people who would be doomed with current medical technology, a chance to be cured in the future.

Who Wants to Be Cryopreserved?

Seth MacFarlane, actor and cartoonist best known for his work Family Guy, American Dad, and Ted, has expressed interest in human cryopreservation. In an interview with Larry King in 2012, MacFarlane said that he shared King’s desire to be cryopreserved and to have a longer life.

American socialite and businesswoman, Paris Hilton said publicly in 2007 that she wants to leave a mark on the world, and believes that cryonics offers her the chance to do that. At the time of the interview, she allegedly invested in Cryonics Institute. In addition, she has signed two of her dogs up for the service: her Chihuahua Tinkerbell and her Yorkshire Terrier Cinderella.

World renowned electronic dance music DJ, record producer and executive Steve Aoki set up the Aoki Foundation which works to increase awareness around brain health and new discoveries in longevity and age-reversal. The foundation also invests in brain preservation and funds anti-aging technology. He has expressed that he wishes to be cryopreserved, along with his family.

Ray Kurzweil is an American author, inventor, and futurist with some notable literature on the topic of artificial intelligence (AI). He has also been instrumental in the development of optical character recognition (OCP) and speech recognition technology. Aware of the potential technological developments that may come over the next decades, he wants to know how it will change our lives, and experience it for himself. He has signed up for human cryopreservation with Alcor. ‍

Another cryonicist celebrity interested in human cryopreservation is Ralph Merkle. A computer scientist who made significant developments in cryptography with the invention of Merkle’s Puzzles and cryptographic hashing, he is now a speaker and researcher in cryonics. He is currently on the Alcor Board of Directors and the Scientific Advisory Board. In addition, he also has signed up to be cryopreserved with them in the future.

The co-founder of Paypal, Peter Thiel, has already invested heavily in anti-aging and longevity science foundations. In 2009, he invested millions of dollars into the Sens Research Foundation, a non-profit organisation that aims to eventually cure the disease of ageing. Theil believes that we will see huge technological advancements over the course of the 21st century, and that he could benefit from them by being cryopreserved.

Now that we’ve covered celebrities who have expressed they want to be cryopreserved, let’s tackle the rumours. Who’s been speculated to have been, or signed-up allegedly for human cryopreservation?

Simon Cowell, TV personnel and record executive known for his work on American Idol and America’s Got Talent, stated in 2011 he was interested in signing up for cryopreservation. At the time, Cowell saw it more as an insurance policy for a potential chance of evading death. However, in 2020, after being roasted by a comedian for wanting this procedure, Cowell clarified that he was no longer interested in being cryopreserved. Why? According to him, he didn’t like the idea of having his head chopped off. Someone should tell him you can do whole-body preservation, not just brains.

American singer, Britney Spears expressed as early as 2010 her interest in being cryopreserved. Tabloids and close friends commented how she was obsessed with the idea, but had never made any official statement at the time. Allegedly, in 2015, she signed up for cryopreservation although it is unclear with which provider.

Perhaps the most famous name to have been linked to cryopreservation was Walt Disney. When one thinks of human cryopreservation, there is a high chance that Disney first pops into the mind. Rumours circulated after his death about his supposed interests in cryonics and death. It was rumoured that he was cryopreserved and stored beneath Sleeping Beauty’s castle, or under the Pirates of Caribbean at Disneyland in Anaheim, California.

However, after his funeral, his body was cremated and entombed at the Forest Lawn Memorial Park in Glendale, California. In addition, at the time of his death, cryonics was in its infancy. The Cryonics Society of California (CSC) only performed the first human cryopreservation only a few weeks after Disney’s death.

Tragically, he died in 2021, but did he get his wish? Was he cryopreserved? Likely not. According to a family source of King’s, they along with members of his family had a heart-to-heart discussion about what his wishes were after his death. After consideration, King decided that he didn’t want to be cryopreserved.

Who Has Already Been Cryopreserved?

So we’ve covered celebrities who’ve expressed that they want or have signed up for cryopreservation, and debunked a rumour or two. But has anyone famous actually been cryopreserved already? There have been a few! Let’s find out who has already undergone this procedure.

FM-2030 (or known previously as Fereidoun M. Esfandiary) was a Belgian bornIranian-American Transhumanist philosopher. In the mid 1970s, he changed his name to honour the year that he deemed we would live in an ageless society. In addition, he wanted to break free from traditional naming conventions prevalent in our modern society.

In July 2000, he died of pancreatic cancer in New York. Sadly, no standby team was present upon his legal death. However, a team of technicians were able to cool his body using bags of ice and had him transported from New York City to Scottsdale, Arizona. It took 30 hours for his body to reach his final destination. His head underwent cryopreservation while his body was cremated. He was the first person to be vitrified, and is now in cryostasis at Alcor Life Extension Foundation.

The most renowned, and controversial, celebrity to undergo cryopreservation was two time Triple Crown winner Ted Williams. Prior to his death in 2002, he expressed in his will that he wanted to be cremated. However his children, with the exception of his eldest daughter, instead sent their father’s body to Alcor’s facilities in Arizona. Following a long legal battle, a legally binding document proved that Williams wanted to be cryopreserved after his death.

Dick Clair was an American television producer, actor and writer. In 1988, he died from complications due to AIDS. An active member of cryonics, he was a member of the Cryonics Society of California from the 1960s up till his death. He actively contributed money to groups such as Trans Time.

Months prior to his death, he was hospitalised where he faced opposition for his desire to be cryopreserved. After the results of the court case Roe vs. Mitchell, which resulted in the legal right for people to undergo cryopreservation in the state of California, he was eventually cryopreserved after his death. Like Williams, Clair is now stored at Alcor’s facilities.

Last, but certainly not least, “the first frozen man” to undergo human cryopreservation was James Bedford back in 1967. But how did this come about? The president of the Cryonics Society of California, Robert Nelson, offered to conduct this new treatment in 1965 to Bedford. While no one took part in the experiment upon its announcement, in 1966, Bedford contacted Nelson to volunteer for this procedure. Bedford died the next year from kidney and lung cancer at the age of 73. After his legal death, he was placed into biostasis and now resides at Alcor’s facility in Arizona.

During his cryopreservation, there were many curiosities and complications surrounding the first-ever cryopreservation. At the time of Bedford’s death, cryonics was just starting to establish itself, and we have since learned in the last 60 years how to improve cryopreservation.

Over the last few decades, human cryopreservation has increased in popularity. However, it’s not only the famous who can qualify for cryopreservation. You can too! If you would like more information on signing up or all things cryonics, check out our articles at Tomorrow Bio Insight. You can also check out our ebook, Introduction to Cryonics. If you have any questions, feel free to contact us via Discord or even schedule a call with us

Your Ebook will be emailed to you shortly!
Oops! Something went wrong while submitting the form.
Tomorrow Bio is the worlds fastest growing human cryopreservation provider. Our all inclusive cryopreservation plans start at just 45€ per month. Learn more here.
TAG:
Cryonics
Top Stories
Top Videos
Cryonics