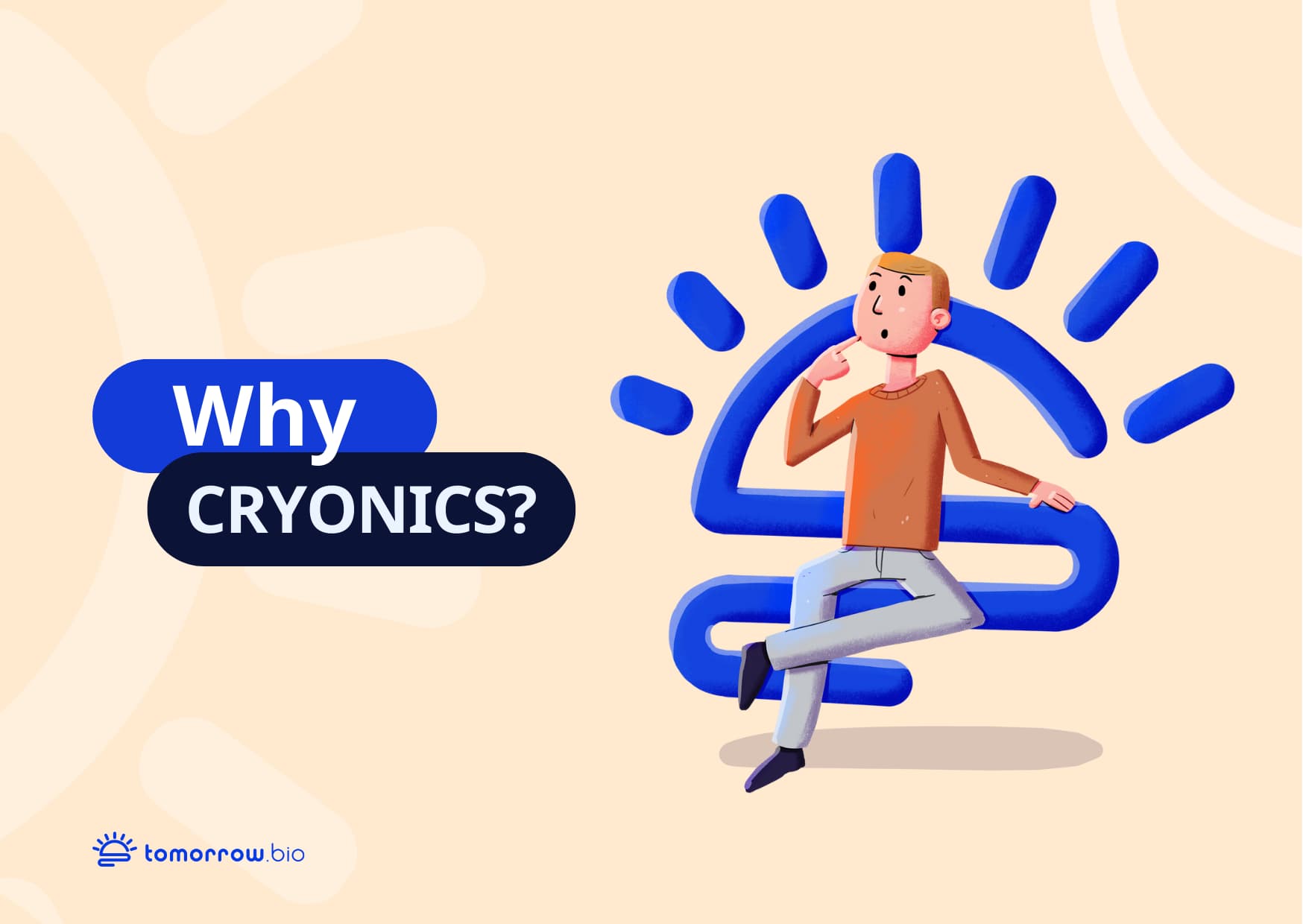 What’s The Purpose Of Cryonics?

What is cryonics final goal and why would anyone want to do it?

A common question we receive, especially from people encountering Biostasis aka Cryonics for the first time, is: “but why?”. What’s the big purpose behind human cryopreservation? Why do people decide to have their legally dead or, as we prefer to say, “biologically paused” bodies stored upside down in liquid nitrogen for possibly centuries? In this article, we try to clarify Tomorrow’s main purposes and some of the “whys” that moved our members to sign up for biostasis. Maybe you'll relate to some of these reasons.

To understand what human cryopreservation is trying to achieve, we first need to define what death means. In the past, we had very little understanding of the process of dying. You’re alive and then you’re dead. Sometimes for obvious reasons, sometimes for obscure ones. With the development of medical technology, we now understand that death is caused by specific diseases and injuries and that we can take actions to influence them. If our current technology is developed enough, we can treat these diseases and injuries and temporarily fight death. If it’s not, they overcome us.

Cryonics goes a step further. It allows us to take people affected by diseases and injuries we aren’t currently able to treat and “pause” their degradation (after legal death). Through a process called vitrification, we replace all water in the body with cryoprotectant agents. As the temperature lowers, the body enters a glass-like state that limits damage at a cellular level. Cryopreserved patients can be kept in this state indefinitely. Or, in other words, for as long as it takes for medical technology to develop enough to finally be able to treat the cause of death and thus, save their lives.

When it’s described like that, it seems like cryonics could be the most incredible medical technology mankind has ever invented. It could possibly help save countless lives. Despite this, many people still aren’t convinced of the possibilities offered by human cryopreservation. This is probably due to the various limitations cryonics is currently facing:

Why would anyone want to be cryopreserved?

So, the ultimate purpose of biostasis is to be the solution for today’s untreatable diseases, allowing people to have a say in the limitation of their lives. But why would anyone want to stay alive longer than currently possible?

In the cryonics world, there has long been debate about how ethical it is to want to live longer. Those who are against cryonics argue that space must be left for the next generation. Those in favor, on the other hand, argue that there will be room for everyone. In a future where revival is possible, in fact, we‘ll probably be able to produce what we need for everyone in a clean and harmonious way with our environment.

Moreover, some say cryonics is a selfish choice. This brings up a rather interesting logical fallacy. Nowadays, many people adopt behaviors that will help them live a long life. Eating healthy, exercising, staying away from stress, and taking supplements to name a few. Most people look favorably on these behaviors. Just as they look favorably on emergency medicine that saves lives of people who were doomed only a few decades ago. But where do we draw the line? At which point are we supposed to stop medical technology from saving lives and people from doing things that could make them live longer?

While reflecting on these matters, let's have a look at some of the reasons why Tomorrow's members decided to sign up for human cryopreservation.

Humans tend to think about the future and make predictions. It’s a natural tendency that (ironically) we base on the memory of the past. Our predictions about tomorrow are based on how things went yesterday.

When we try to predict what will happen in decades or centuries from now, things get a bit more complicated. This is because, after the Industrial Revolution, our society has been evolving exponentially. Who would have imagined 100 years ago that we would go around talking to people on the other side of the globe? It makes you wonder, how will we communicate 100 years from now?

Despite the fact that predicting the future is a daunting task, we humans don’t back down from doing it. Think about all the sci-fi enthusiasts out there and the bulk of books, films and whatnot that have been produced in possible futures.

Biostasis gives people a chance to experience the future. To see first hand if their predictions will come true or not. Clearly, if you think that the future is nothing but pain and suffering, you may not be interested in experiencing it. But if you imagine a future where people will live in peace and equality, robots will do most of the work and we’ll have friends coming from different galaxies… Then why not give cryonics a shot?

Have you ever felt like you were constantly short of time? Between work, family, some sport and maybe a hobby, there’s little time to do anything else. Cultivate a new passion? Study something that has always attracted you? Take a bike tour of Latin America? I hate to break it to you, but with an average lifespan of a little over eighty years, you will have to decide which activities to prioritize and which to give up.

Let us take traveling as an example. Most people love to visit new countries and would visit the whole world if they could. This means 196 countries (some of which are so extensive, they could be considered closer to five than one). Yet, an average person (the figures specifically relate to an average British person) has visited just under 10 countries. More precisely, 9.58 countries, which is something around 5% of the world.

While some are content to see what they can in a lifetime, others have opted for the possibility of living an extended life. To learn a second, third and fourth profession. And maybe to actually take that bike ride they had once envisioned. Perhaps with a flying bicycle or some futuristic device we can’t even imagine.

Since the beginning of mankind, technological developments have improved our lives. Of course, growth brought challenges and downsides with it. Think, for example, how many of us would not be able to find our way around without Google Maps. Or how hard it would be for people used to our standards of living to survive without running water, heating, and instant messaging. But whether you are an appreciator of the conveniences brought by technology or regret the lack of contact with nature in modern society, one thing is certain. The human condition, as a whole, has improved. We can now live way longer than ever before. We can treat diseases and save lives that were doomed in the past. We have created tools that give people with disabilities the right to an equal life. From 3D audio maps for people with blindness and customized bionic prostheses, technological innovations are enabling lives unimaginable in the past.

Now, envision that this is just the beginning. That the technologies of the future will allow us not only to implement missing human senses but to add new ones on top. After all, some steps in this direction have already been taken. As in the case of the cyborg artist Neil Harbisson who, born with total color blindness, can now perceive colors as sounds thanks to a neuronal antenna implanted to his skull. Or North Sense, a cybernetic implant attached to the chest that vibrates when facing North.

While these innovations might seem odd to some, many others are thrilled by them. In the future, we will probably be able to do things never seen before. And since we do not know how long it will take to reach this future, cryopreservation remains the only possible solution for now.

Technology for the revival of cryopreserved patients has not yet been developed. Some say it will never be (although there is no scientific reason to prove that it couldn’t be done). For others, it is worth trying. For many, the possibility of what humanity could gain is far more valuable than the cost of investment.

In return for an affordable monthly fee, cryonics members can help develop a possible life-saving technology. This might not only treat their disease but also give them a chance to see the world of the future, perhaps become superhumans, and travel to other planets.

It is up to you to choose whether cryonics is right for you. Do you think it's worth it? If so,  you can  sign up here. If you’re still unsure, schedule a call with us so we can answer all of the awkward questions you've always wondered about cryonics.