Why You Should Sign Up for Cryonics NOW (Instead of Later)

It’s easy to procrastinate signing up for cryopreservation, but is it worth the wait? 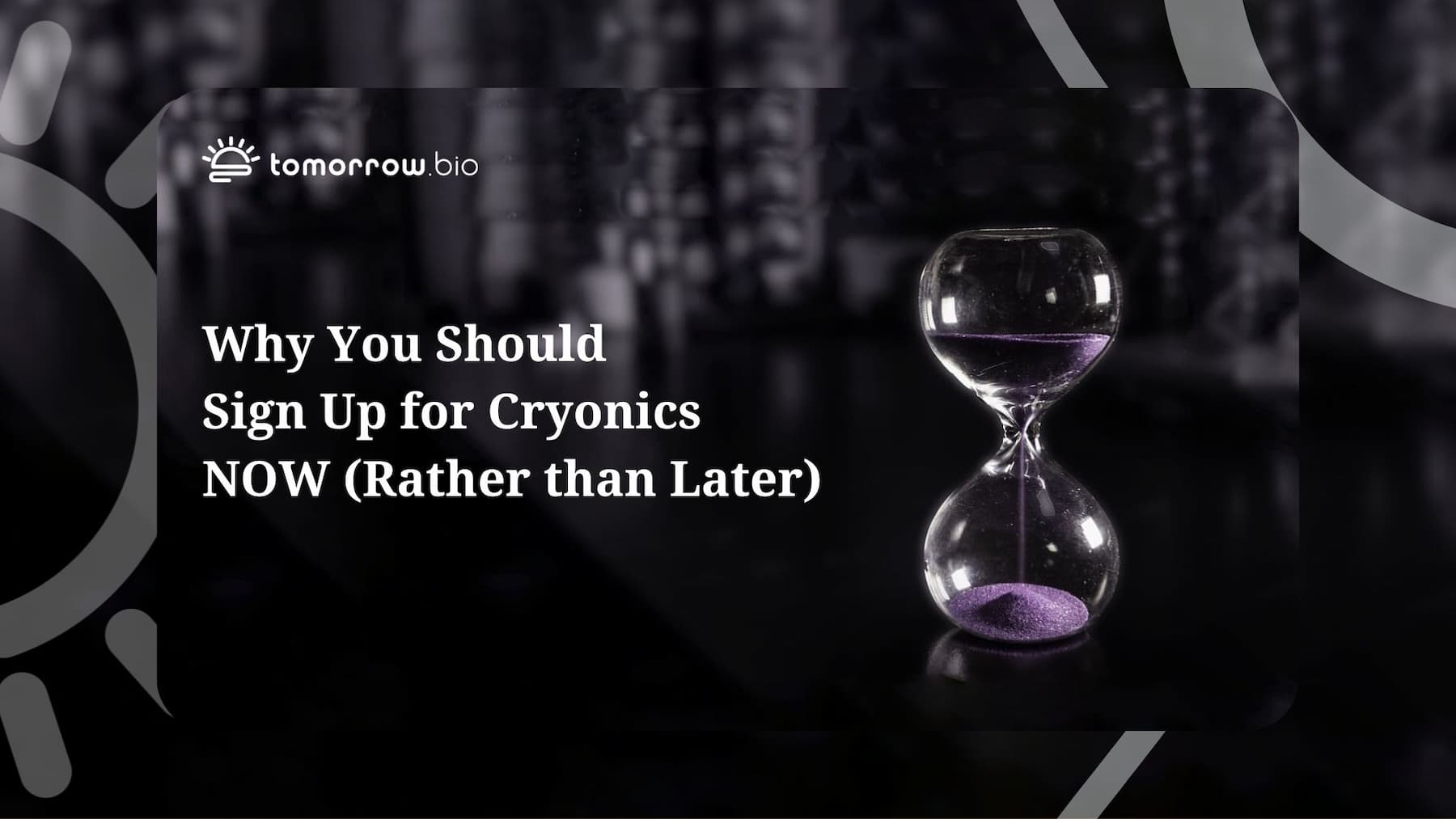 So, you’re interested in human cryopreservation. You know you want to sign up, but think that, for whatever reason, you don’t need to sign up immediately. Maybe you think you’re young and have plenty of time, or that it’s cheaper to do it when you’re older. If you’re interested in signing up but procrastinating, that makes you what is known in our field as a cryocrastinator.

Planning postmortem preparations is a matter most people would rather deal with later than now. After all, death is the ultimate unknown so planning for what happens after you die can be uncomfortable, even frightening to some. However, in cryonics it’s important to deal with this matter sooner than later. Signing up for cryopreservation now rather than further down the line makes sense in the long-term. It can reduce the risk and cost of this service, and give you peace of mind throughout your life.

Signing Up Sooner vs. Later

A factor to consider when signing up for cryopreservation is how you will fund it. The price of cryonics might seem daunting, but it is more affordable than you think. One of the most common ways to fund this service is through either whole life insurance, or term life insurance. The difference between the two is that term life insurance is a fixed contract that covers someone up until a specific date, usually up to 65 years. Whole life insurance, on the other hand, provides death benefit coverage over the course of your life to your legal death.

Signing Up Now vs. When You’re Old: Price Tag

When signing up for insurance to cover cryopreservation costs, it’s cheaper to do this while you're still young. Age is one of the primary factors that can influence your insurance rate. Why is this the case? For insurance providers, the cost of life insurance is based on actuarial life tables. This tool shows the probability of a person dying before their next birthday, and insurance companies use this to calculate and set premium rates. Unfortunately for older clients, insurance premiums are much higher compared to younger clients because they are at higher risk of dying.

So let’s say you’re 25 years old now. Monthly insurance rates for a plan up could cost around €29 a month. This price could increase depending on your clinical history and your status as a smoker. If you postponed signing up till you were 35, this rate would increase up to potentially €34 per month. If you waited further till you were 55 years old, the rate could be up to €110 per month. That’s a massive difference compared to if you purchased life insurance while you were 25! Signing up while you’re young provides you with a longer coverage period for less money than it would if you purchased insurance when you were older. So, financially speaking, it’s better to sign up for cryopreservation now than later.

Can I Be Insured at a Later Date?

As each of us continue through life, accidents and diseases can arise unexpectedly. For some, a chronic or terminal disease can be critical in their eligibility for cryopreservation.

Depending on which insurance plan you pick, some providers may not cover certain pre-existing conditions such as cancer, high blood pressure, diabetes, or certain mental disorders. In addition, as we explained above, if you purchase an insurance plan when you’re older, it will be more expensive compared to if you purchased it when you were younger. So, if you wait to sign up for cryopreservation and you are diagnosed with a chronic condition, you may either have to pay more than you would have if you purchased a plan before the diagnosis, or you might not be covered at all.

Risk of Diseases and Accidents

Life is unpredictable. You might be perfectly healthy, but a sudden downward turn in health, or an accident can alter your life in a single moment. Basketball star Hank Gathers was diagnosed with an abnormal heartbeat just a month into the 1989-1990 basketball season. During a game against the Portland Pilots, he collapsed on the court and never got back up. He was only 23 when he died.

One of the biggest reasons people procrastinate signing up for cryopreservation is that they feel no sense of urgency. They are young and healthy. Time is on their side. If you live in Europe, the average life expectancy is around 80 years old. And therein lies the problem: if you think time is one your side, signing up to be cryopreserved is not a major priority.

You think that you’ll have to sign up, but sometimes diseases or accidents happen and cut life short. Now statistically, the chances of suddenly being diagnosed with a terminal illness or incurring a serious accident are significantly low. Humanity is at a point in time where life expectancy is more than doubled than it was centuries ago. But wouldn’t it be better to be covered with cryonics in the event of the worst case scenario?

It’s often easy to put off important tasks when you’re young. It’s only with age that one realizes just how much time passes, and how little there is of it left. When you’re aware of the passage of time, it can be stressful. However, you can reduce this by signing up for cryopreservation to give you peace of mind. Once signed up, you won’t have to think about it until much later in life. If something unexpected happens, you will have the safety mechanisms in place to ensure you are taken care of. Cryopreservation can be that safety mechanism to provide you with the confidence and assurance you need to live your best life.

Life can be unpredictable but it doesn’t have to be. The purpose of cryonics is to provide people the chance to decide how long they want to live. With cryopreservation, this is a unique opportunity to extend one’s life in the event it is cut short. By procrastinating to sign up for this service, you might be putting your own life at risk! So, if you don’t want to be a cryocrastinator, take the initiative and sign up now. If you have any questions, feel free to schedule a call with us, or chat via Discord, and see you tomorrow!