How Has “Death” Changed Over Time?

How has death changed over time, and how is cryonics facilitating this? 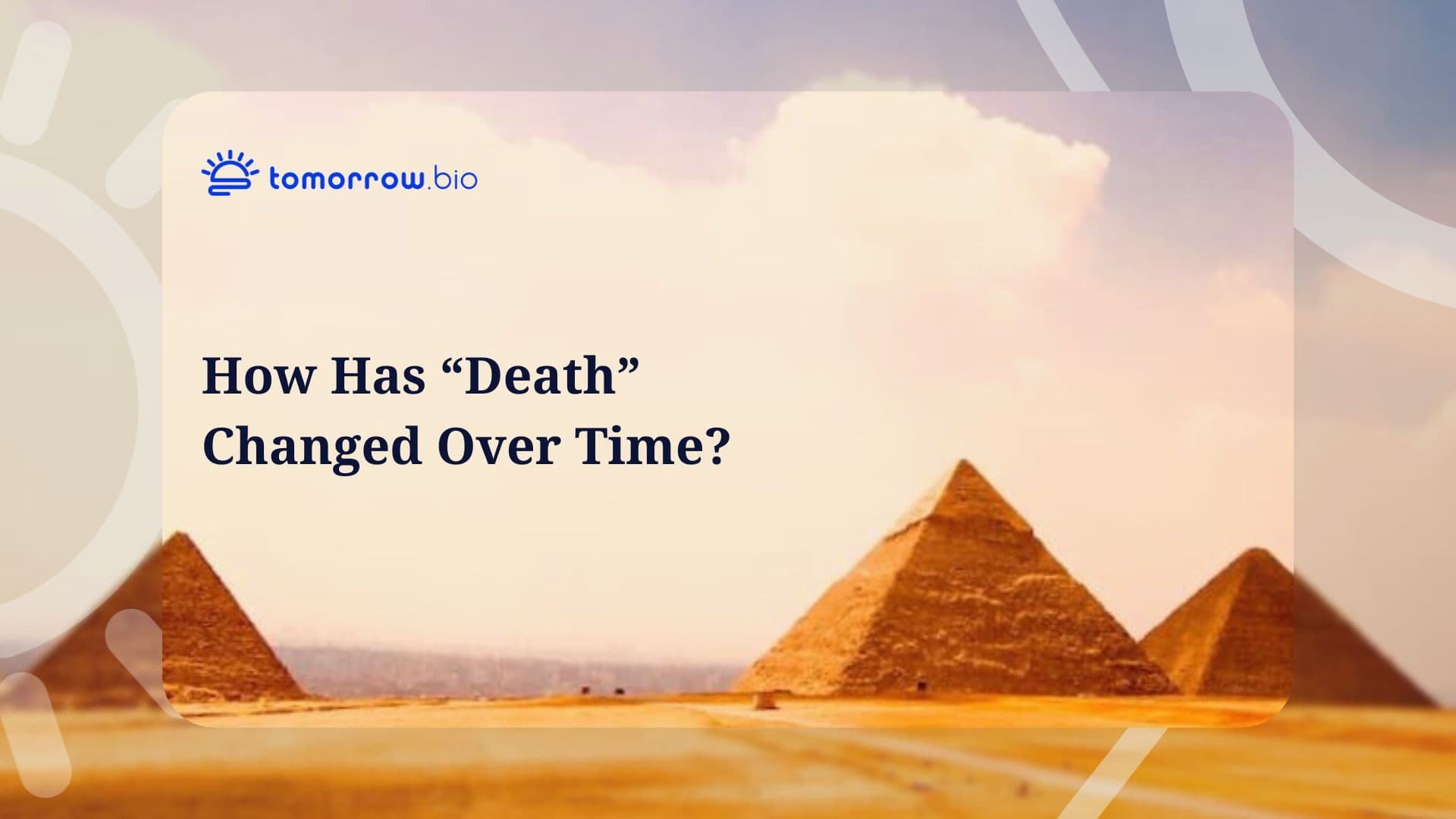 Working in cryonics and life-extension, we are no stranger to death. It’s a topic that we regularly discuss at length. It’s defined as “the cession of all vital functions; the end of life”. However, as we continue to expand our medical knowledge, this concept has been subject to change. But how has our understanding of the end of life evolved over time? Let’s dive in.

The One Certainty of Life

When discussing a broad concept like this, it’s important to understand our relationship with the dead. Depending on when and where in the world you are, important factors such as culture can shape our perceptions and beliefs surrounding our final rest. This is best reflected in burial practices and rituals. While our past perception of dying is significantly different to today, a shared opinion was that there wasn’t really an end. There was the prospect that the deceased would venture onward to an afterlife, or be reborn back into the world.

However, over time, as medical and scientific knowledge advanced, so too did our understanding of what it meant to die. As we learn more about what happens to the body as we age, how it breaks down from disease, we can work towards extending our life-span. Cryonics helps facilitate this using cryopreservation and cryogenics to help ‘pause’ the degradation process by putting patients in biostasis.

But how did we get from mummification and elaborate burial practices to cryopreservation?

What Happens When We Die?

If you went back thousands of years ago and asked a person what happened to them after they’ve passed on, chances are they’d say they would venture to some sort of afterlife. Even though past cultures and civilizations didn’t understand the concept as we do now, on some level, it wasn’t necessarily an end point.

For some ancient cultures such as the Egyptians, ancient Irish and Scottish, or Chinese, they believed in the concept of an afterlife. This is still held in most modern religions, whether it’s Heaven, Paradise or something else. Even though the body may have ceased to be, the spirit was believed to live on.

As societies continued to advance over centuries, our beliefs on the end of life began to change. For example, throughout the Victorian era, dying, especially from diseases such as tuberculosis, was often romanticized. It was still heavily intertwined with religion with the belief of a ‘good death’ at a time when death was common in Victorian life. By the time of the World Wars, it became a morbid subject.

In the Post-World War world, as medical advancements helped improve the longevity of humanity, cessation of life was no longer seen as a natural end point, but rather a medical failure.

Treatment of the Deceased

How we treated the dead in the past compared to now clearly illustrates our changing relationship with the subject.

For example, in Ancient Egypt, dying was not seen as the start of the end but rather a temporary interruption. This is due to their belief in immortality, which could be achieved through proper funeral rites, e.g. mummification. This would allow individuals, if they passed the “weighing of the heart” ceremony, to move on to the afterlife where they would remain for all eternity. This custom was established during the Old Kingdom (between the 4th and 5th Dynasty) around 2600 B.C.E, and continued for millennia through the Roman period till around 364 C.E.

In contrast to the common methods of entombment and cremation, an interesting burial practice endures to this day. It’s known as excarnation, or the removal of flesh from bone. One place we can see this is in Tibet with Sky Burials. When a member of the community passes away, their body is cut into pieces by the Burial Master. The remains are then left on a highly elevated site to allow vultures to consume the flesh. Supposedly, they take the body to the heavens where they will remain until they are reincarnated.

Today, our attitudes towards treating the deceased have changed. In the United Kingdom, a study found that 58% of people would prefer to be cremated, compared to 17% who preferred to be buried. People are also becoming more environmentally conscious about burial methods. In addition, with the aid of medical research, our understanding of what it means to pass on has changed dramatically.

Advancements in Medicine and Technology

Before the 1960s, if you had a heart attack, the medical procedures at the time wouldn’t be able to save you. After the development of cardiopulmonary resuscitation (CPR), we understood that even if you suffered a heart attack, there was a chance that you could be revived. This has helped alter how we understand the end of life process, and what can be done to save a patient. Now, we understand that dying is a process with 4 concepts of death:

This is a relatively recent phenomenon. In addition, breakthroughs in medical technology helped increase the longevity of humanity. Life-saving drugs such as penicillin, insulin, and vaccinations have helped to treat diseases, saving many lives in the process.

New innovations such as the integration of artificial intelligence (AI) in medicine are being utilized as well. In the United Kingdom and United States, as well as in many other countries, medical researchers are working with AI software to detect early signs of cancer in people. Advancements in robotic assisted surgery, while still in the works, have contributed to minimal invasive surgeries such as gastrointestinal, transplantation, and even bone. AI technologies are also essential in medical imaging for machines such as CT scans (computed tomography), x-rays, and MRIs (magnetic resonance imaging).

Today, procedures such as cryopreservation continue to challenge our assumptions about the end of life. The purpose of cryonics is to cryopreserve patients suffering from incurable diseases so that, with the aid of future medical technologies, they can be cured and revived. To do this, the standby team must wait until legal death is declared before they can work to halt the degradation process.

Just as CPR works to revive a patient after clinical death, cryopreservation aims to pause biological death. The difference is that cryonics works further along this progression.

This is especially significant when discussing the concept of information theoretical death, which can be seen as a permanent end. When a patient reaches this stage, it means that the brain is damaged so severely that any information that could be retrieved, memories, personality, intangible aspects of a person, is impossible. The underlying principle of this is that, even with the benefits of future technologies, this information is lost and cannot be recovered. However, it is unclear when someone reaches this phase, with the exception of serious brain damage/destruction, or missing a brain entirely.

By delaying the degradation process, cryonics is delaying expiration indefinitely. If we can ‘pause’ death, how might this change our understanding of what it means to die or even to be ‘dead’?

Our understanding of death as a concept has and will continue to change over time. In the past, the soul of a person was meant to endure after departing. With cryonics, we hope that not only the soul of the patient, but their physical body could survive and live in the future with the support of new medical technologies. Emergency medical interventions like cryonics will contribute to altering our assumptions and concepts. Who knows how this will change in the future? Could medical technology advance till humanity reaches a point where some sort of immortality is a possibility? Cybernetic enhancements, or mind-uploading technologies? There are endless possibilities.