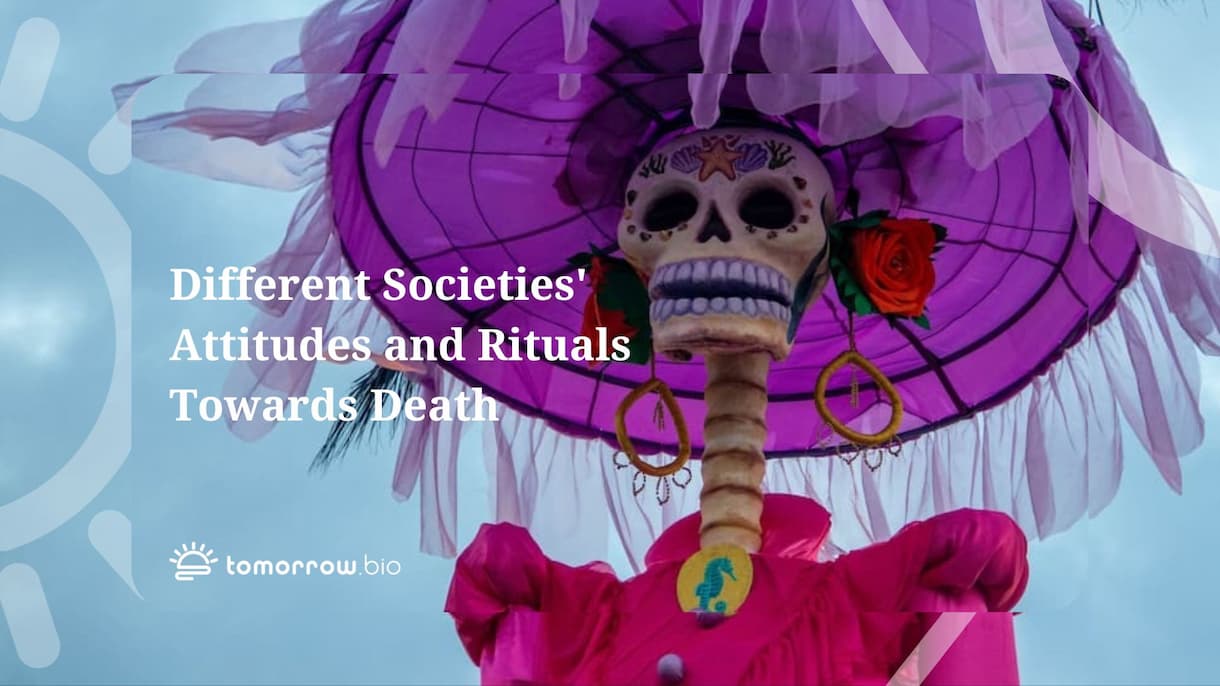 No society is exactly the same, neither are attitudes and rituals about death.

When we think about death, societal attitudes, and rituals surrounding it, it might seem like they’ve been the same for centuries. Someone in the community dies, there’s a funeral and they’re either buried in the ground or cremated. However, this isn’t the case.

The truth is that beliefs surrounding the dead and the afterlife have and continue to change across different cultures. What happens when and after we pass on is subject to different customs, beliefs, and traditions that have shaped cultures into what they are today. Now, technologies and medical procedures such as cryonics have the potential to do the same and redefine our perception of life and death. Let’s take a look at three different societal attitudes and rituals surrounding the recently departed.

Let’s turn back the clock to the time of the ancient Egyptians. At the heart of ancient Egyptian customs and religion was the belief in immortality. Death was perceived as an interruption, something that could be overcome, not the end of all life. This is reflected particularly with the Egyptian deity Osiris, god of fertility, agriculture, as well as the afterlife, the dead, life, and resurrection.

Why this association? According to mythology, Osiris was murdered and dismembered by his brother Seth. However, his wife, Isis, was able to find nearly all of his body parts and was able to give Osiris a new life. Upon his resurrection, he became ruler and judge of the underworld.

Osiris’s worship was solidified by 2,400 BCE as both a fertility and death deity. From that point onward, those in Egyptian society who passed on were associated with Osiris. This is reflected primarily in the burial rituals of the period, i.e. mummification.

The main goal of this burial technique was to preserve the body as much as possible according to certain rites and rituals. The process, in principle, is not too dissimilar to cryopreservation. However, instead of removing the brains, cryonics aims to preserve them (along with the rest of the body in the case of whole-body cryopreservation) via vitrification. Not to mention, unlike the pharaohs, patients aren’t stored in pyramids, but in cryogenic storage dewars until future medical technologies can facilitate revival.

The mummification ritual was to ensure that the soul of the deceased would be able to return to their body and live again in the afterlife. This ritual involved specific customs such as purifying the body through burning incense, incantations and blessing the body with holy objects. It was known as the “opening of the mouth” ceremony that was carried out to restore senses to the body.

So what would happen to the soul of the recently departed? The journey to the Underworld wasn’t easy. The departed would embark on a solar bark as they passed through the underworld. Once they reached the Halls of Osiris, they would undergo the ‘Weighing of the Heart’ ceremony to judge the virtue of the individual’s soul. If their heart was lighter than a feather, the soul would achieve immortality. If not, then they were devoured by the goddess Amemet.

The reputation Ancient Egypt acquired of being “death-obsessed” is a bit misleading. The elaborate offerings of food, drink, and worldly possessions were meant to ensure that the departed could continue to live a good life after death. In other words, the ancient Egyptians celebrated both the living and the dead.

Now, let’s jump ahead in time and go further east to the highland region of Southern Sulawesi in Indonesia. Here on this large island live the Torajan people. For the Torajan, death is both a social and gradual process toward Puya (the afterlife, “the land of souls”). Even after a loved one passes on, until they receive a funeral, they aren’t considered gone. Instead, they are referred to as to’makula, or a sick/not yet dead person. It is not uncommon for the bodies of the deceased to remain in their family homes for some time after their departure. The longer they remain with their family, the more money the family can save to pay for the funeral. While with the family, the body is treated as if the person were still alive; they are fed, dressed, and comforted within the family house until the funeral.

Funerals among the Torajan are an elaborate affair. These ceremonies can take place weeks, months, or even years after the death of the deceased. During this time, the corpse is wrapped in multiple layers of cloth and kept under the tongkonan. For the funeral itself, one of the rituals involved is animal sacrifice, usually water buffalo, or chickens or pigs in some instances, for the funerary feast. This is because according to Torajan belief, animals, mainly water buffalo, are essential for the deceased to continue their journey to Puya. The more water buffalos that are sacrificed, the faster the soul can reach Puya.

Once this has taken place, the dead are laid to rest either in one of three ways depending on the wealth of the family: their coffin may be placed inside a cave, or in a carved stone grave, or hung on a cliff. The grave is expensive and can take months to complete.

So, once the deceased is buried, that’s the end of it, right?

In August each year, the Torajan carry out a ritual called the Ma’nene. This custom pays tribute to the Torajan dead. As part of the ritual, the people exhumed the bodies of their favored ancestors to wash, clean, and dress them. The ritual is more than just treating the deceased, but is a reflection of the relationship between the living and the departed among family. The two co-exist together, and even death cannot break the bonds of family. This is a bond that cryonics also hopes to maintain. If revival is successful, then descendants of cryopreserved patients could have the chance to meet their ancestors face-to-face in the future.

For our final visit, let’s take a journey to Mexico and look at one of the most renowned rituals and customs focused on the deceased. The Day of the Dead (Día de los Muertos) is a holiday centered around celebrating and paying respect to family members and friends who have passed on. Though relatively similar to Christian remembrance festivals like Halloween and All Saints’ Day, this festival is a more joyful affair.

The Origins of the Day of the Dead

The origins of this holiday have been speculated as to whether or not the festival has pre-Hispanic indigenous roots, or if it is an adaptation of European traditions, or a possible hybrid of both. In pre-Columbian Mesoamerica, the Aztecs and Nahua people living in the region of Mexico believed that death was integral and a part of life with a cyclical perspective of the universe.

Despite this, death is prevalent in Mexican history, from colonization and conquest by the Spanish, to the violence during the Mexican Revolution. This specific day of worship reaffirms the roles between the living and the dead, and the beliefs of Mexico’s indigenous communities. In 2008, this holiday was inscribed in the UNESCO’s Representative List of the Intangible Cultural Heritage of Humanity.

The holiday commemorates the return of the spirits of the deceased to earth, which coincides with the annual cycle of cultivation for maize. Families help facilitate this by laying offerings, candles, and flowers along the path from the cemetery where their loved ones are buried to their homes. Food and dishes favored by the deceased are prepared and placed around a family shrine along with homemade offerings. Great care is taken in all aspects of the festival as the spirits of the dead are believed to bestow either prosperity or misfortune upon their family.

So, with our journey around the world concluded you might be asking yourself, “What does any of this have to do with cryonics?” Just as culture can shape our understanding and attitudes toward the dead, so too can sciences like cryonics.

The aim of cryonics is to allow people the choice to decide how long they want to live for. To achieve this, a person upon their legal death can undergo human cryopreservation. This process pauses cellular degradation within the body through vitrification. This allows medical technologies the time to advance to the point that the cause of death can be cured, and the patient can be revived from biostasis.

Today, with the aid of modern medicine, we understand that death is not a final endpoint, but a process. This is not too dissimilar to beliefs about the transitory nature of death in ancient Egypt or even among the Torajan.

“In this world nothing can be said to be certain, except death and taxes,” wrote Benjamin Franklin. It is an aspect of the human experience we all at some point deal with. How we think, and address the deceased is a different matter. Societies across time and space have shaped their own attitudes and rituals related to the dead, and continue to do so. As we mature as individuals, and as society changes, our attitudes toward death evolve alongside our traditions and customs.

What might seem strange to us today can then later become the norm. Cryopreservation is an example of a shift in our attitudes and, to some extent, our rituals treating the departed. Though it has yet to become mainstream, perhaps decades down the line, this service will be the new norm for treating the legally dead.

Will this be the next major shift in societal attitudes relating to death? Let us know what you think on our Discord server, and check out more of our articles at Tomorrow Insight for more information about cryonics. See you tomorrow!