What’s the Difference Between Clinical, Legal, and Biological Death?

Do you know the difference between 3 types of deaths? Find out here. 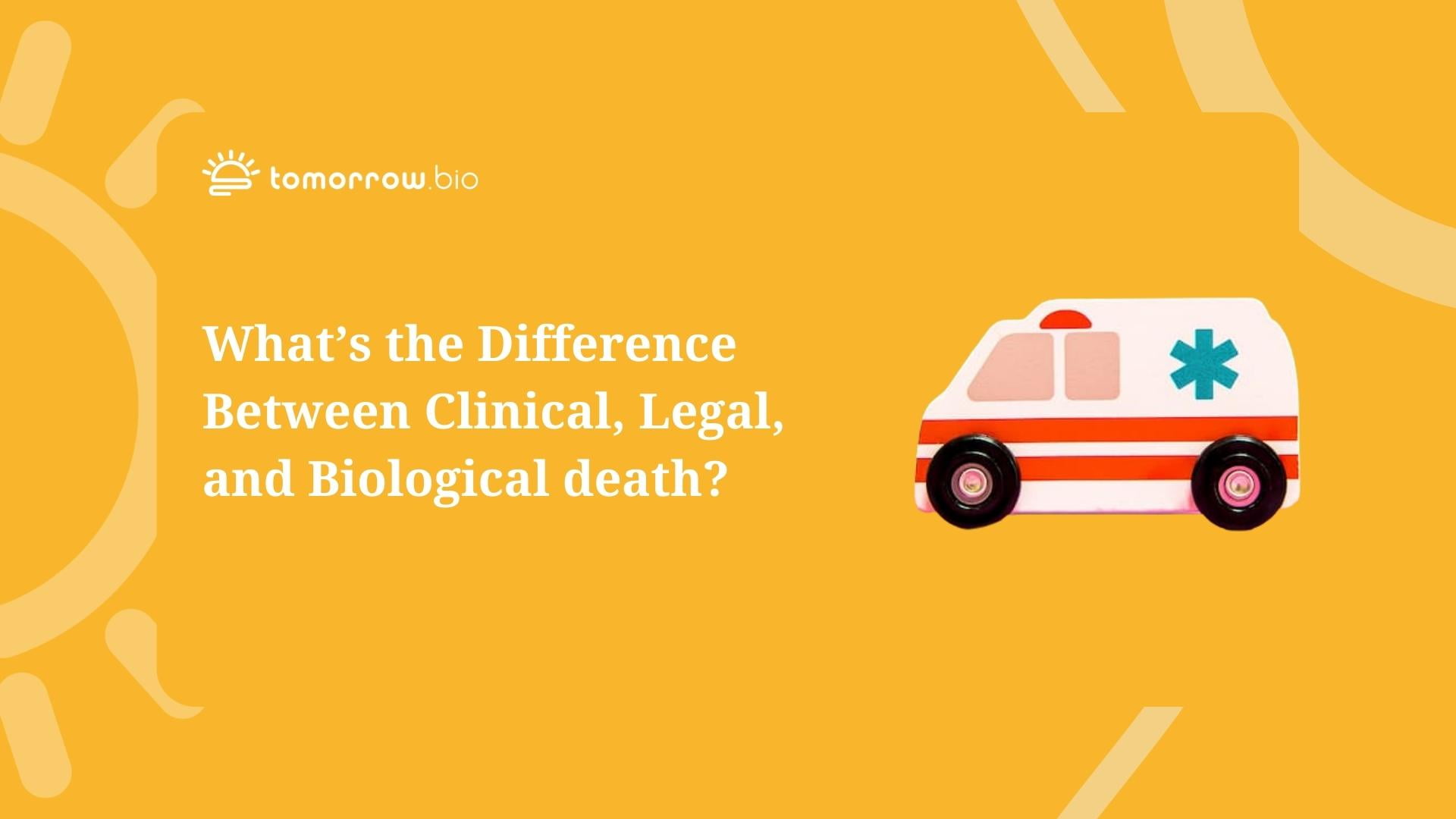 You may be asking yourself this. Afterall, once someone’s dead that’s it, right? Not quite.

Thanks to advancements in medicine, our understanding of death and what it means to be ‘dead’ have changed. Before the development of cardiopulmonary resuscitation (CPR) in 1960, if you had a heart attack, you’d be declared dead. However, now it’s not the case.

Today, we understand that death is a process that consists of different concepts: clinical, legal, and biological death and a fourth which we will discuss later. This differentiation is especially critical for cryopreservation.

But what exactly is the difference between them? For this, we’ll need the help of Patient Bob.

So, Bob is walking down the street, when suddenly, he has a heart attack. His heart stops beating: is no longer pumping oxygenated blood throughout his body. This is clinical death. However, there is still a chance to save his life! An ambulance is called to help him, and once the emergency medical technicians (EMTs) arrive, they begin to administer CPR.

At this point in the process, Bob can be resuscitated with minimum damage to the brain. The sooner medical professionals are able to intervene, the greater chance they have at saving him. This is the critical aspect of clinical death: it can be reversed.

After Bob’s heart attack, the EMTs hurry to save him by bringing him to the hospital. While treating him, the EMTs see that Bob is signed up for cryopreservation thanks to his black wristband that has Tomorrow Bio’s contact information. As Bob’s condition worsens, the hospital alerts the standby team of his imminent death. Once informed, the team hurries to the hospital.

Despite their best efforts, the EMTs are unable to revive him. His heart has ceased to function and there is no way to restore it with current medical technology. The doctor then calls the time of death and pronounces Bob legally dead. For legal death to occur, a medical professional must declare it.

However, there are other factors to consider depending on where you live. In Germany, a doctor must examine a patient to determine if a patient is dead. A sign that they can look for is livor mortis, or the gravitational pooling of blood in the lower portion of the body. This causes the skin to turn a purplish-red, discoloring the skin. So, if you’re lying in a German hospital, if a doctor examines your body and finds signs of livor mortis on your back, they can declare you legally dead. However, this is one option for determining death.

Legal death is crucial for cryonics. In all cases, standby teams (SSTs) cannot perform the procedure on a patient until after it is declared. Once this is done, they can begin the process of cryopreservation.

Now, the EMTs have given up, and the doctor pronounces Bob legally dead. Now we need to discuss the process of a concept known as  biological death.

For cryonics, a.k.a. biostasis, it’s important to carry out the cryopreservation procedure immediately after legal death to halt cellular decay. At this point, the cells in Bob’s body begin to recycle and subsequently die due to lack of oxygen. In most cases, this is critical within the first 4 to 6 minutes his body is without oxygen. Think of the 4-6 minute period without oxygen as the transition between clinical to biological death.

The longer Bob is without oxygen, the more cells in his body will die. This chain reaction can cause irreversible damage to Bob’s brain and vital organs.

Does this mean that there is nothing that can be done to save him? Technically, no: medical personnel could resuscitate Bob. However, after 6 minutes of oxygen deprivation, brain damage will worsen with the chance of permanent brain damage. Current medical technology is not capable of reserving this brain damage. If there is no medical intervention after about 11 minutes, then there is little chance of survival for Patient Bob.

However, there is a factor we haven’t considered.

Let’s say that Bob wasn’t walking down the street when he got a heart attack, but is on a boat instead.

He’s carrying out research on penguins in Antarctica when he falls overboard. The boat and crew try but fail to pull him back onto the boat. Only after 45 minutes of effort are they successful. He’s not breathing, nor is his heart beating. He is clinically dead at this point. The crew perform CPR on him while they bring him to the nearest medical center. His body temperature is below 14 degrees Celsius. Before declaring him legally dead, the doctors try one last medical intervention. They use a heart-lung machine to warm his blood before circulating it throughout his body. His body temperature begins to rise. After a day of intensive medical treatment, Bob wakes up!

But how is this possible? He was without oxygen for 45 minutes while in cardiac arrest. He should be dead, but biological death was delayed thanks to the very low temperature of the Antarctic Ocean.

Hypothermia is a critical factor that can delay biological death. This was the case for Anna Bågenholm, a Swedish radiologist who fell into a frozen lake while on holiday in Norway in 1999. It wasn’t until 80 minutes after the incident that a rescue team was able to reach her. Her body temperature was around 13.7 degrees Celsius. Despite this, doctors were able to revive Anna by pumping blood out of her body to rewarm it, gradually raising her body temperature until eventually her heart began to beat.

While a warm brain can only survive a few minutes without oxygen, lower temperatures reduce the metabolic rate. This means that the body's need for oxygen decreases, which prevents cellular death. In essence, it slows down the degradation process, not unlike cryopreservation. This is especially critical for cryonics patients as this process prevents another type of death.

Yes, there is in fact a 4th death. This is known as information theoretical death.

What this means is that the brain is damaged so severely that revival is impossible with current or even future technologies. All the aspects that make Bob who he is, his personality, his memories and other information about his personal identity, cannot be retrieved. This is linked to irreversible brain damage, whether from oxygen deprivation, serious brain trauma, or even just the lack of a brain (e.g. if Bob’s body and brain were cremated).

Whatever the reason, any information that could be gained from the brain is no longer possible. In cryonics, information theoretical death could be defined as permanent death, or past the point of no return.

Cryonics is the practice of preserving a patient after legal death at cryogenic temperatures. This is done in the hope that future medical technologies will develop enough to treat the cause of death and revive them. By putting patients in biostasis, we pause the death process, and give them a chance to receive life-saving treatments in the future. Its purpose is similar to CPR; an ultimate emergency intervention to save lives. However, while CPR is a treatment that can bring people back from clinical death, cryonics halts information theoretical death.

This is why timing is critical for standby teams. While we can’t state exactly when theoretical information death starts, it is a factor that can impact the quality of preservation. The faster the standby team can reach a patient, the better cryopreservation they are able to provide as the chance of information-theoretical death is minimized.

These are ideal conditions. Does this mean you can’t be cryopreserved if you’ve been legally dead for a long period of time? No, this isn’t the case.

We would always prefer to cryopreserve patients under ideal conditions, but sometimes there are unforeseen complications. An accident, a sudden turn in health, anything could happen. It could be hours or even days after legal death’s been declared. However, if you’ve signed up for cryopreservation, once we can reach your body, we will carry out the best procedure possible given the conditions. As we do not know to what extent future technology will be able to revive cryopreserved patients, we don't feel entitled to decide who is salvageable and who isn't. If we can access your body and brain, even with a delay, we will cryopreserve you.

Cryonics, just like CPR did in the 1960s, could help redefine our current definition of “end of life”. We understand now that death is a process, one we are continuously learning about. Our current concept has changed in the last 60 years. Imagine how death as a concept could change in the next 60, 80, or even 100 years. Curious? Then you should consider signing up for cryonics and see for yourself.