Explore some of the most common false beliefs about the cryonics industry. 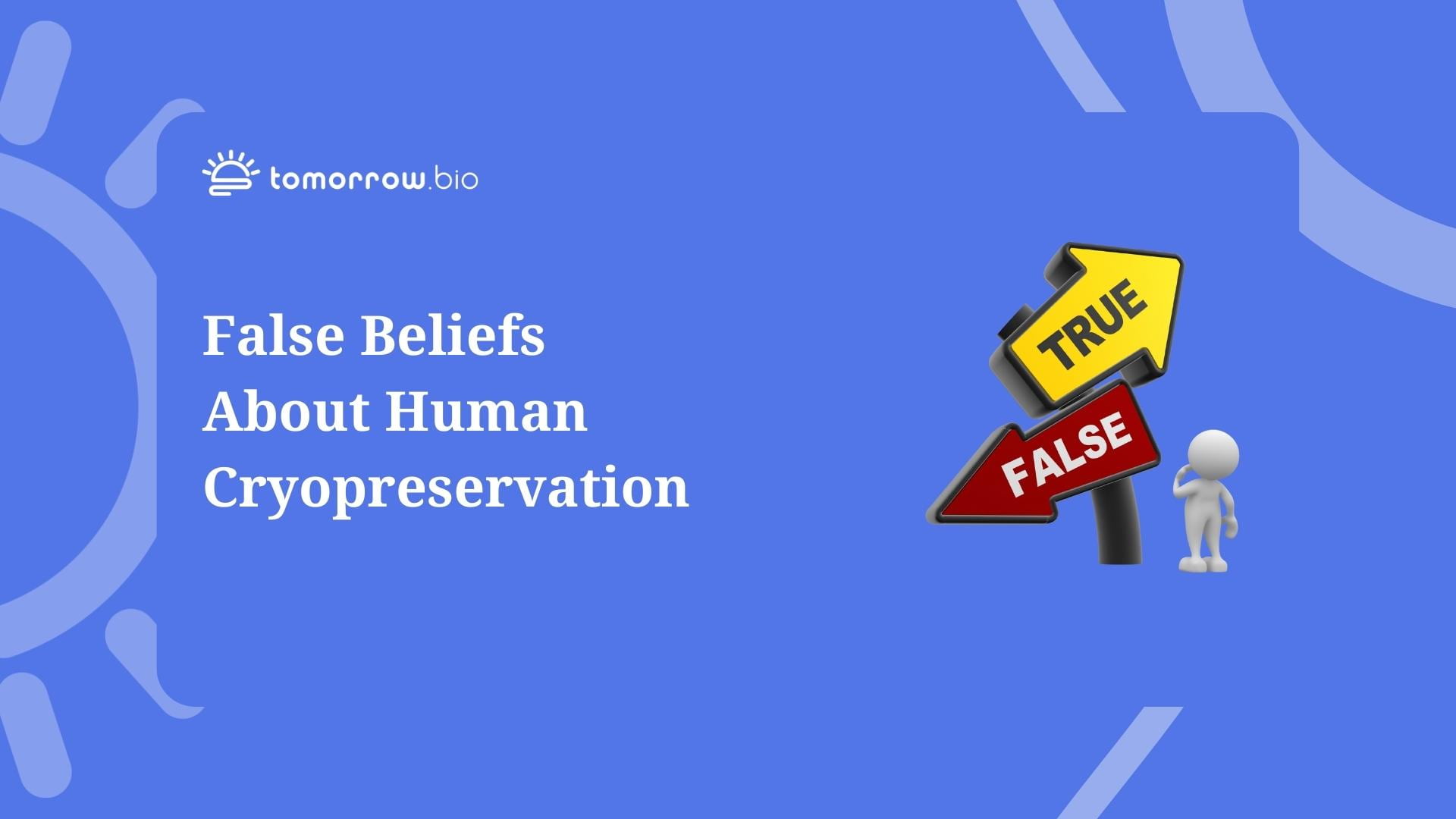 Making the decision to sign up for cryopreservation can be a little overwhelming. With all of the misconceptions and inaccurate ideas about what cryonics is, it’s understandable if you’re hesitant. However, contrary to Hollywood-spun information, cryopreservation has nothing to do with freezing bodies. Nor is it only about rich individuals who can’t accept death.

Unfortunately, years of movies and science fiction novels have led to a pretty specific (sometimes negative) idea of how cryopreservation works and why it’s used. This mainstream perception is often far from what cryonics (biostasis) really is. The purpose of cryonics is to offer a life-saving technology to all people, independent of where they are, who they are, and their financial resources. Although there are several false beliefs about human cryopreservation, we’re here to separate fact from fiction and provide you with some key information about the industry.

False Beliefs Regarding the Cryonics Industry and Cryopreservation

There are several misconceptions about cryonics and new “opinions” continue to emerge. In our previous article, we set some of these myths straight. Although some people might say cryonics can never work, there are hundreds of patients currently cryopreserved and there’s no fundamental biological reason why revival is not possible. Cryonics also has nothing to do with freezing people. They’re vitrified (in a glass-like amorphous state), which allows patients to be preserved indefinitely with minimal damage to tissues. You can find more of these misconceptions in the link above.

Regardless of proving these points to be myths, people still hold false beliefs about human cryopreservation. To help you better understand the cryonics industry, here are additional misconceptions commonly spread around.

Once You Are Dead, What Makes You Who You Are is Gone

One of the biggest false beliefs that skeptics hold is that even if you were to be revived from cryopreservation, it wouldn’t actually be you. They assume that once you die, what makes you who you are is gone. While the biostasis industry doesn’t advocate that they can bring people back to life, we perform cryoprotection prior to the info-theoretic criterion for death (info-death for short). What does that mean, exactly?

Death is not a linear event. It’s a process that can be stalled and even reversed in certain situations. That’s because there are four different concepts of death: clinical death, legal death, biological death, and info death. Clinical death occurs when your heart stops beating (cardiac arrest). This can be reversed using different resuscitation methods. Legal death is when a medical professional has determined that there is irreversible cessation of functions—resuscitation would no longer work. Biological death begins when the cells, left without oxygen for more than ten minutes, begin to recycle and die. Here is where cellular damage starts to kick in. Info death occurs when there’s absolutely no possibility that any current, or future, technology could retrieve the information stored in the brain. The cellular damage within the brain has left nothing from which information can be retrieved.

Scientists Are Against Cryonics

There are also some scientists (and cryobiologists) who do not publicly endorse the cryonics industry. This doesn’t mean that they reject the idea from being a possibility. There are reputable and credible scientists on both sides, which is completely normal in the scientific community. Many of the professionals who side “against” cryonics do so simply because they’re not informed enough to make an informed judgment and broadcast it to the public. That’s a big difference from rejecting the idea altogether.

If you’re interested in hearing from some of the most prominent cryonics scientists, researchers, and experts, check out the upcoming Biostasis2022 conference. A few of the speakers include Aaron Drake, Roman Bauer, João Pedro de Magalhães, Aschwin de Wolf, Ramon Risco, and more.

Cryonics Operators Cut Off Heads, Then Freeze Them

First of all, cryonics does not involve freezing anything. If freezing were to occur it would cause extensive damage to cells and tissues within the body. Second, there actually is a method of preserving only the brain called neuro cryopreservation. People assume this means that someone’s head is barbarically severed and simply tossed in a freezer. This is far from the truth.

Neuro cryopreservation is the process of cryoprotecting the brain (inside the severed head) following legal death. This can allow for a reduction in cryoprotective agents (CPAs), as peripheral parts of the body don’t need to be perfused. The rest of your body is usually cremated. Since the general consensus from research indicates that your personality, memories, and streams of consciousness are stored in the brain, preserving the head should be enough for future revival.

Some cryonics providers offer this option, but at the moment Tomorrow Bio offers all-inclusive whole-body cryopreservation as we believe this is the safest way to drive growth in the sector.

Investing in Cryonics is a Waste of Money

When you sign up for cryopreservation, you help fund the research and development needed to advance the field. If you’re not ready to sign up, there are also options to invest in cryonics through programs like our Tomorrow Fellow. Every dollar that you donate or invest into the field is making a difference in advancing technology and saving lives.

The misconception that it’s a waste of money merely means that people don’t understand how cryonics relates to other fields. In reality, cryopreservation is a life saving technology and the advancements in this industry can also influence other fields (i.e. organ transplantation). Medical breakthroughs that happen in cryonics, therefore, could help extend the time that an organ remains viable outside of the body, thus helping millions of people around the world receive a donor organ in otherwise fatal situations.

People Who Are Cryopreserved Fear Death

It’s normal to have a fear of death. There’s no evidence to prove what happens after we die, so thinking about mortality can be difficult for many. However, most people who choose to get cryopreserved don’t do it because they fear death. They do it because they love life. People within the cryonics industry are curious about the future, they wish to have more time to spend enjoying life, and want to continue to expand their experiences. They believe in technological development and don’t see why we wouldn’t be able to achieve something as complex as revival in the future. Plus, many members of the cryonics community take a “why not” mentality. That is, they understand that the alternatives like burial and cremation provide a 0.00% chance of future revival, but with cryopreservation they may end up living in the future. Why not give yourself that chance too?

The Final Goal of Cryonics is Immortality

Some people see the cryonics industry and associate it as a type of immortality-chasing community. That’s a bit extreme. Even after revival you could die of some sort of accident. The goal of cryonics is not immortality. The goal of cryonics is to provide everyone with the chance to determine how long they want to live by developing a life-saving technology. This would give people a chance to live in the future, when technologies may have been developed that could eliminate aging, treat diseases, and potentially save countless lives. This could make biostasis one of the most beneficial medical technologies to be invented. We don’t know how the future will be, but it’s likely going to be pretty different from today. Maybe immortality will be the norm, maybe not. At Tomorrow Bio, our goal is to offer the ultimate emergency medicine that gives you the chance to choose.

Although there are many misconceptions about cryonics, they hold no scientific backing nor truth. Cryonics is a life-saving technology that is still being researched and developed, but cryoprotection allows individuals to be stored indefinitely (so time is not an issue!). While there’s no guarantee that future revival will happen (or when it will happen), research and development is promising. That’s why the cryonics community has continued to grow over the years.

At Tomorrow Bio, our job is to help educate the community so you can make an informed decision about your future. If you’re interested in learning more about biostasis, schedule a call with a member of our team today or sign up now! If you’re not ready to make the jump quite yet, you can also become a Tomorrow Fellow and help us fund research projects while saving towards your future cryopreservation. So, what do you think? Did you believe any of these misconceptions before this article?